Giants have emerged from their strongholds to threaten civilization as never before. Hill giants are stealing all the grain and livestock they can, while stone giants have been scouring settlements that have been around forever. Fire giants are press-ganging the small folk into the desert, while frost giant longships have been pillaging along the Sword Coast. Even the elusive cloud giants have been witnessed, their wondrous floating cities appearing above Waterdeep and Baldur’s Gate. Where is the storm giant King Hekaton, who is tasked with keeping order among the giants?

The humans, dwarves, elves, and other small folk of the Sword Coast will be crushed underfoot by the onslaught of these giant foes. The only chance at survival is for the small folk to work together to investigate this invasion and harness the power of rune magic, the giants’ weapon against their ancient enemies, the dragons. The only way the people of Faerun can restore order is to use the giants’ own power against them. 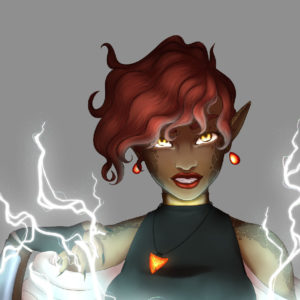 His eyes snapped open.  The first thing he saw was the bright glare of the sun overhead, dazzling him. ...

As we rejoin the action, Caelynn, Lunar, Jaghol and Mord finish dealing with the gnolls that had snuck into...

We rejoin the action where Chupacabra rides into danger far away from the rest of her team.

Milo and Borrowed have to deal with the petrified statue of Merlin, Milo’s old mentor, an Aarakocran wizard.

Borrowed prepares a gift for Milo at Victor’s enchantment shop, while they stop in a small seafront town to...

With Iymrith destroyed and the Storm Giants taking control of the other clans of giants once more, peace starts...

With the battle against Iymrith won, the group travels through her lair and splits her treasure between themselves.