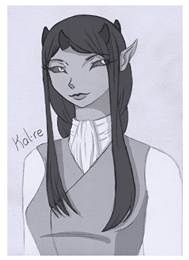 When the crops feeding the small village Kal-re was born in began failing, the townspeople who had generally ignored their little farm, turned quickly and with the encouragement of a passing self-proclaimed holy man.

Fleeing their home, the villages pursued and it was only because Kal-re’s small body fell into an abandoned animals nest that she survived. When she woke up and returned the next morning her parents where nowhere to be found and the farm had been burned to the ground.

She left the village and lived out on her own in the outlands eventually adapting to the terrain surviving through hunting and trading with Orcs. Eventually, she left the Outlands and began to live as a travelling fighter. taking on jobs to maintaining enough money to keep her equipment in good nick. Otherwise, she had no real goal in mind. She doesn’t know what she wants to do with her life.