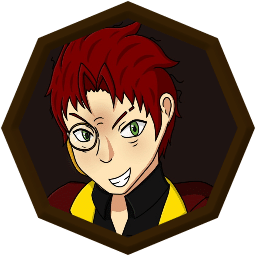 Brandiven had a normal childhood, despite being quite a bully for his classmates during his youth. This caused him to have little to no friends and Brandiven chose to remain close to only his family and his servants, ignoring the world around him.

During his teenage years, Brandiven showed disinterest over the family business in the Guild of Slaves to the greatest disappointment of his father. At 15 years old, Brandiven left his house and travelled to Selrig to join the Temple of the Bounty Hunter. He showed great talent in this field and quickly became the top of his class. He even got a reputation as a Bounty Hunter that would rarely bring his preys alive, to the point where nobles and rich people of the Confederation would avoid meddling with him in affairs.

Brandiven Chancey did not care however and satisfied his instincts during his jobs. In 1832 A.S, Brandiven was called by the Meeting of the Elders on Caribel and joined the crew of the Constellation as the pilot. During the course of the missions with the Constellation, Brandiven and Mahrden became very close until creating a romantic relationship in a brothel on Atrig III.

Afterwards, Brandiven Chancey started to acknowledge his homosexuality and feelings for Mahrden Mahrahzoo. In the Hilvetian Confederation, homosexuality is forbidden and very badly viewed, and Brandiven feared his parents’ reactions. The love of Brandiven, however, helped Mahrden getting over his link with the God of Chaos, Kaleb.

When preparing the Battle of Marlingorr, Brandiven Chancey suggested to join forces with the Guild of Slaves and use their armies in the battle.

Coming back home, Brandiven confronted his father and mother with his new way of life, only to learn that he was to be married to Kalyne Daelyon, daughter and heir of the Guild of Metals. The marriage had been arranged by both parents and was already planned. Brandiven faced a very difficult choice between his duty as a son and his love for Mahrden. Not wanting to hurt Kalyne, he accepted in getting engaged and joined her in the reception on Maerig, organized by her family but never finally agreeing to marry her.

Brandiven Chancey was confronted by the Gifter during this party who offered him a pact, protecting people he loved in exchange for an apple. Brandiven accepted, stating that he wished for Mahrden to be safe and live longer. The Gifter accepted and took life years from Cid to give them to Mahrden. Horrified by the result, Brandiven tried to prevent the next events but it was already too late.

Every new wish terrified Brandiven even more on the power of the Gifter, until the Battle of Marlingorr where Brandiven was confronted with the Gifter again. While his friends tried and failed to defend Brandiven, he was grabbed by the Gifter and thrown from a dome to the lowest floor, losing his eye, the apple of his soul.

Upon coming back to Anoda, the team tried to help Brandiven cut his link to the Gifter. Calling the Empire for help, they sent Acolytes from the Church of the Faith alongside the Bishop Dalnorix V. Avtenar to retrieve Brandiven Chancey. He was sent to the Temple of the Church of the Faith on Suliri to be cut off the power of the Gifter and heal his mental wounds. He will come back to the team eventually and was replaced by Dalnorix V. Avtenar in the meantime. 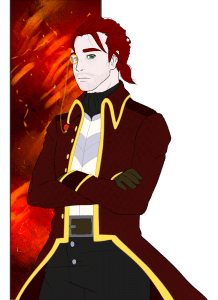