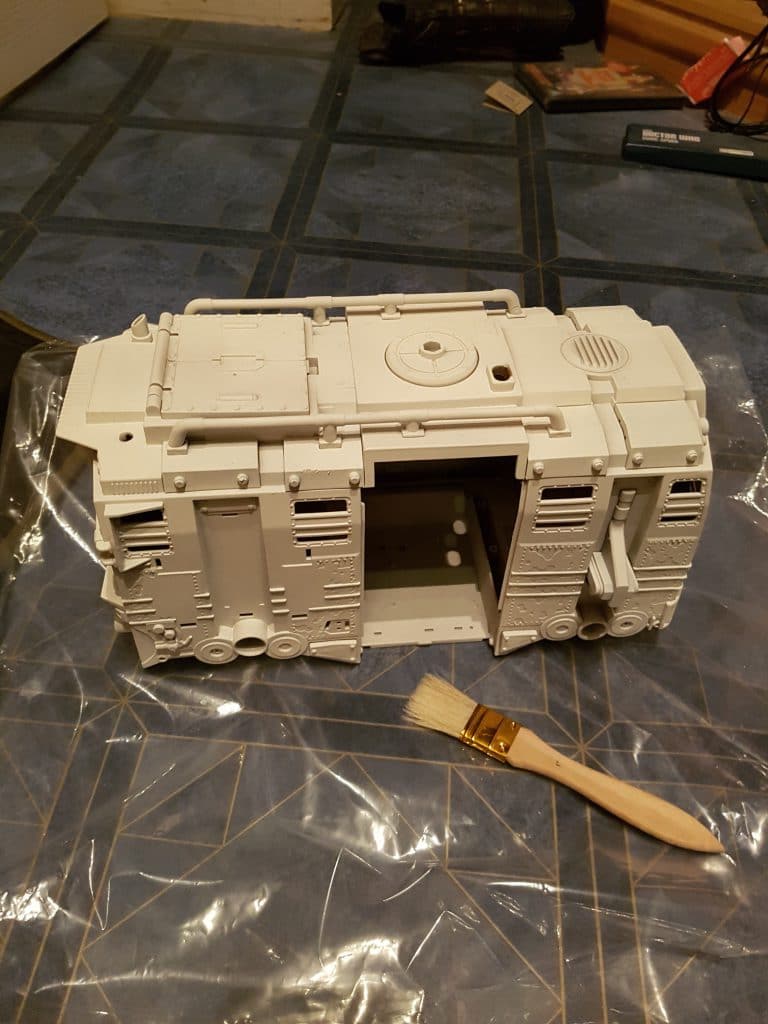 So, there might have been a little bit of time between parts. My bad – I haven’t been that creative in the middle there. And there was Christmas too… It seems the second episode of The Tinker Ninja Tinkers will have a very similar theme to the first. My friends and I set out to do a crafting project again… and we ended up with Mr Bob Ross, some canvas and some paints again. 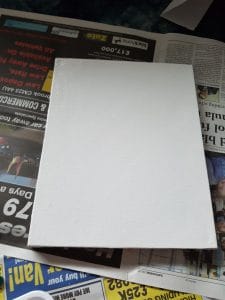 This time we managed a step that we missed out on last time. We more prep time, and a trip to our local craft store (thanks Hobbycraft), we got our hands on some Liquid White, and prepared the canvas first. We picked out an episode with a nice little happy wildlife scene and started picking out some of the paints… and then rapidly switched to another episode when we realised that Bob had access to a lot more paints than we did. A happy scene with trees and a little shed was picked and we started applying paints to the canvas. 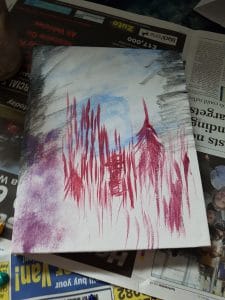 Here, we can see that there was a slight… happy little accident… that occurred when painting the sky. Working out from the centre, we blended lighter colours with progressively darker shades of blue, and then a touch of black was added to the mix. Which overpowered everything else. The trees worked very well, in my humble opinion, simply streaking the colour down the canvas with a single line dragged down with the same brush, in fact, most of this painting was done with a single brush. The only big difference were the branches on the trees, which were done with a much thinner brush.

Then disaster struck.  Not my painting, but the subject of the painting, took a slight departure from the happy tree scene that Mr. Ross was painting. Bushes were called for. Made by simply jabbing the paint brush lightly into the paint and then lightly jabbing that along the bottom of the trees, carefully adjusting shades to ensure multiple layers and the appearance of different bushes. My colours however became slightly redder… somewhat more fiery than the original.

I then attempted to add the shed, and it didn’t look right. So I took the decision to go off plan. I started building out the shape of the ‘shed’ and turned it into the silhouette of an onlooker. 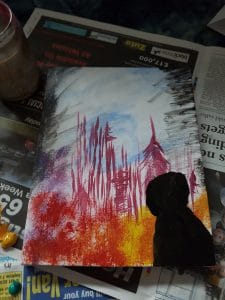 The little path, the ravine. All of the following details. I omitted these, leaving the above scene, a forest fire, with a mysterious shadow watching the mayhem. Did he cause it, or is he there to extinguish the blaze… Who knows?

This burst of creativity had another side effect. I now had some paints. I saw the colours of the Turtle Party wagon in the mix of the paints that we used. There’s been less progress on this front, but I have painted the base of the yellow panels in a dark ochre, and will need to get more paints to do another layer of this shade before working to build up the colours. Enjoy this gallery of the work on the Turtle Wagon: