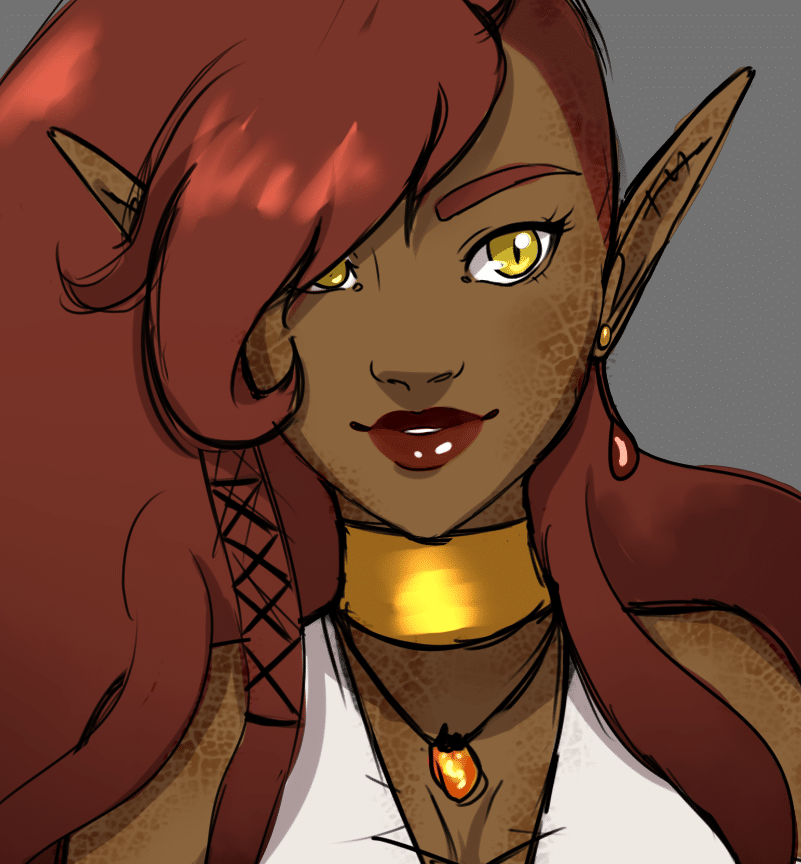 GM Notes: A few weeks ago I thought it would be interesting to see what music people thought fitted their characters in my DND games and so I present to you a hopefully weekly article featuring the playlist of each of the characters. This week, following a minor disruption in the communication network, Caelynn’s playlist finally made it through from the airship.

“Where lies the line between sorcery and science? It is only a matter of terminology, my friend.”
Caelynn is a sorcerer with draconic bloodline running through her veins. Her goal is to explore the world and to seek the knowledge on the history of dragons and its magic and secrets. Strong, Charismatic and determined, Caelynn joins the Storm King’s gang in hope to help her new friends on the quest to defeat the Giants with a lil bit of magic.

They whispered to her ear “You can’t withstand the storm”. She replied “I AM THE STORM”.

In Caelynn’s veins runs the blood of the ancestor Bronze Dragon, taking pride in her powers Caelynn will destroy her enemies in the destruction of lightning and thunder. With wanting the knowledge of dragons and certain subjects nothing will stand in the way of her goal, not even two frost giants.

Caelynn holds a deep and dark secret that has haunted her for many years, people turn their backs on her and is now also wanted by her own Orc Husband Mord and his clan for a mistake she has made. Too scared to face the consequence she begins to hide away and the only pain she feels is regret.

Chase the Darkness Away

“You learned to run from what you feel, and that’s why you have nightmares. To deny is to invite madness. To accept is to control.”

Caelynn did everything she could to get things right, but it was no use…her plans were becoming worse, her secret was taunting her everywhere causing her to become angry and enraged. She travels across many lands to find a solution but only to be chased again by her husband’s clan. She was no match for her fear.

Turn me to Stone

“I preach darkness. I don’t inspire hope…only shadows. It’s up to you to find the light in my words.”

Hope was no longer a friend of Caelynn’s. She became ashamed and lost from her mistakes, her aimless wanderings take her a mysterious market place where she grieves her pain, she remembers her beloved Mord… oh, how her heartbreaks in regret, her own mothers she has missed for a long time feeling ashamed to betrayed her mother’s love….Just all alone in this world. Through the trinkets of odd n ends she come across a ring that calls her name. Once she had claimed it, it was only a mere second that she had made another mistake that would have left her frozen in stone.

After for 3 years, Caelynn is reawakened by a small group of new friends. After knowing them for a while she began to hope once again. Caelynn seeks a new goal in her life and does her trying best to protect and help her friends in the journey of finding a way to stop the giants. With the new quest, everything she had fear has seemed to be in the past.

We Beat as One

Along her new journey, Caelynn had begun to become her happy self again. Meeting Chupa, Luze, Talon, Fenthwick and even her newer friends Jaghol, Lunar and Briar, she began to realised that she shouldn’t be scared of the past any longer, she has become stronger as she used to be and that she is ready to face her darkness and pain.

The Truth Beneath The Puppet's Strings

“No struggle, no success. The stronger the thunder, the heavier the rainfall”

And to think she was free…..her dark secret was back for more. Fear struck once again Caelynn does the Puppeteer’s bidding. For how long does she have to play as his pawn? “Just a little longer,” she says. The struggle continues as she helps to find the rest of the relics with her team….Will they know the truth of Caelynn’s dark secret? Will she ever be free?

Next: The Story of Seraphine and Simon so far … Part 1