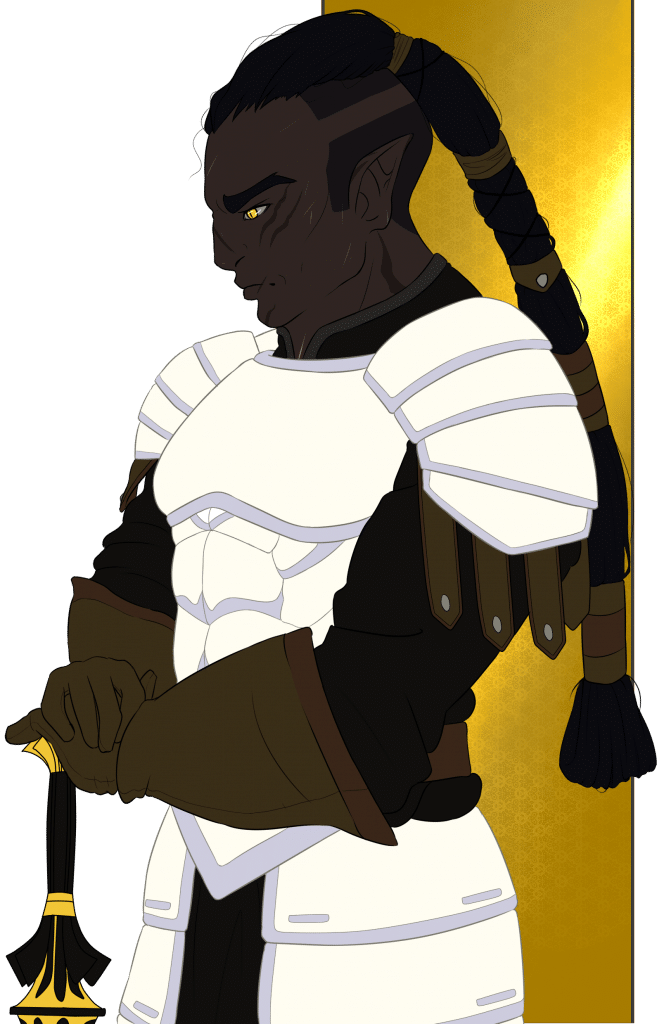 Valoor-Nuun always existed to fight. He died a first time in a battle with Ulrichians. He lived and died as a gladiator. As he began his third life, fighting was his only drive. He spent his young years like many Chronogians, fighting and mating, most of the time one followed by the other. Until the day he fought barehanded a man from the Church of Light and lost. As he was used to, he repeatedly challenged the man who beat him but no matter how many times he tried, he couldn’t grasp victory. For the first time in his life, he found a man he couldn’t defeat. He then asked him how did he get such power, such strength and skill to overwhelm him each time. The man answered that his strength only comes from the Gods of the Light and from serving them.

Not understanding his answer, Valoor-Nuun entered the Church of Light to find the meaning of the man’s words. As he trained harder than most, the prayer eluded him. He worked hard on every chore, putting his monstrous strength to use. But his devotion was lacking. He was only worshipping strength and military achievements in the Gods of the Light. As such, when it was time for him to chose which God to worship more than others, he was forbidden to choose a man amongst the pantheon. Thus he could learn other values and grow from them. After a long reflexion, his choice went on Thesar, the woman he respected the most for the Naering battle but also for her unbending will against the Vega System and the Hilevetian Confederation.

As he was given a small statue of her Goddess, the man who made him enter offered to have a rematch. Valoor-Nuun gladly accepted. Although he lost once more, he felt that his opponent had a much harder time to defeat him compared to before. The chores had strengthened his body even more but most of all, the church itself where they were fighting seemed to help him during his struggle, like a soft whisper moving his body as much as his brain. Valoor-Nuun grasped a piece of the answer he was looking for. He then set off, deciding to bring more people into the Light, showing them the way he was shown and hoping for a galaxy far stronger thanks to the power of the Light.