The Minims: A New Beginning 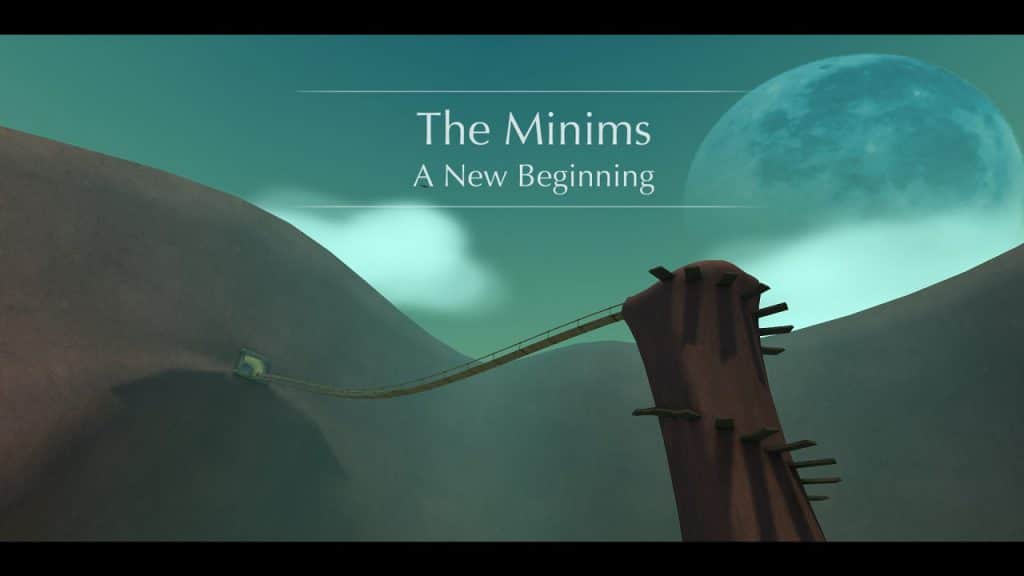 This one’s a bit of a change of pace. Rather than games where you shoot your way through hordes of enemies, fly mammoth spaceships against evil aliens or even face off against opposing warlords to determine the fate of the galaxy, today we’re going to look at an altogether different type of game. The Minims: A New Beginning is a point and click adventure game by beyondthosehills and, unlike the examples above, there is no grand threat to destroy the world, no evil mastermind with his armies of destruction, no zombies, aliens or anything like that. Just you and a journey to find the love of your life.

The Minims are a race of furry blob-like beings with two giant eyes, who communicate with others via though balloons. You play as Mii, one of the last two of this race. The other remaining Minim is your wife, Mo, and you both live happily in your home in the middle of a vast desert. Until one day you wake up from an unusual dream to find that Mo has vanished. Concerned for her safety you decide to follow her, and thus begins a journey across the desert.

I’m not going to say any more about the story because it would spoil what happens. Instead I’ll focus on the other elements of the game. First of all are the graphics. They’re not the prettiest or most elaborate but they do a good job of showing the world that these creatures live in. They look like they’ve been modelled out of clay and, while fairly simple, they do have an attractive quality about them. The main character does a great job of conveying emotion even though he’s only really two eyes and a blobby body, which is not an easy thing to accomplish.

The music and sounds are very relaxing. There’s no sense of urgency or even of threat. Instead, the music just ambles along at its own pace. There isn’t any voice acting – the dialog is given as text in thought bubbles. If I’m being honest, the grammar and spelling could use a bit of work, as the style of text used made errors fairly obvious. Although this is me being pedantic and the few language issues don’t get in the way of the story at all.

What is different about this game is how it portrays moving around. Usually in point and click games, clicking on an area moves your character to that area. Here, there are only a few hotspots that you can interact with – objects and areas. Clicking on an object picks it up or uses it and clicking on an area zooms the screen itself to that area, presumably indicating that you have moved. It’s almost like Myst or that sort of first person puzzle adventure game, except that you can still see Mii on the screen when you return to a wider view. This does come across as a bit strange in some areas, as you can look at some places you shouldn’t really be able to get to.

The controls can take a bit of getting used to. There’s the usual move mouse to object and click, but there’s also the need to rotate the camera to get to other places. Say for example you’re following a path. To return along that path you need to move the camera around to find the way back. The camera itself is quite slow to move, and I can’t find any settings to increase the speed, so this can get a bit labourious, especially when you have to keep going back to the same places for different reasons.

The puzzles themselves vary in difficulty. Sometimes it’s very obvious what you have to do, others don’t give you any clues. This can extend to items you have to find – there are occasions where you can’t actually see any indications as to where to click. There is a hint system which I ended up using quite a bit. It will tell you if there are any actions to take in your current location. If you use it too much however it tells you to try playing without using hints and tells you to wait for a minute before trying again. There were times where I literally had no idea what to do and I found myself turning to the hints more and more. Not ideal but that’s how it is.

Despite my problems with the puzzles I found myself drawn in by the story. The plot starts very simply but it turns into a surprisingly deep and emotional journey. Even though some parts of it didn’t make much sense I still found myself quite moved by it. I’m guessing that this is the first of a series and I will be interested to see if that is indeed the case. If you like games that give you time to think or time to enjoy what’s happening then give this one a go. It may surprise you like it surprised me.

Next: Sniper Rifles – Reach Out And Touch Someone