Hi there. This is going to be an interesting series. I hope.

Along the same vein as the Twitch section Creative, this is going to be a blog post/informal post, where I and several other FBF members talk about the creative tinkering that they get up to, whether it’s painting, model making or something more technical like setting up a Linux Web Server (I plan that I have vaguely running at the back of my head following a project at work last week). I’ll have a couple of regular guests chiming in as well in the form of Natalie, the Maiden, who is going to talk about her crafting efforts with her mum as miniature makers Miles by Design, and the cosplayer Demora Fairy, who will be showing us how she makes her costumes in the run up to comic expos. But other tinkerers will be encouraged to throw in their projects too, so expect some other faces to crop up as this goes along.

I’m intrigued to see how this goes, it’s not going to be a “How-To” or tutorial style post, you might be able to follow along with what we are doing, but that is not our sole intention with this article series. This is more a What we did, and I am sure there will be plenty of people chiming in in the comments section below letting us know how we could do things better… I’m kind of hoping for that actually so I can do better if I have to ever repeat a project.

How this article idea came to me is the subject of this whole first post really. A few weeks ago, my friends and I decided that we would follow along with painter Bob Ross, and try to replicate his artwork from an episode of the Joy of Painting. With varied levels of success, we did paint landscapes. Here’s mine:

Painting in about half an hour (we went for the length of the episode, minus the explanation of which paint colours Mr Ross had used). It was tricky, as something none of us had every done before. I’m mostly happy with how my work of art turned out, particularly the main mountain has grown on me in the weeks since I painted it. This encouraged me to venture into different kinds of painting, like oil painting and charcoal painting, and I ended up even trying some 5d diamond painting kits. At the time I thought it hadn’t worked so well as the paint didn’t come off of the palette knife as well as I hoped, as well as it worked for Bob Ross, but since I think it looks like it’s disappearing into the clouds, or a thick fog in the distance.

After the completing painting, and discussing a future art project that will no doubt make up the second post in this series, I remembered a project I have been ‘working’ on for a while. A few months ago I saw a large series of pictures of someone who had repainted a Hulkbuster Iron Man with a more classical paint scheme, and I thought that it would be an interesting project to replicate. Then at the boot sale that week, with an eye out for an old toy worthy of repainting I found this:

It was missing a door, but about the right price. A mid-90s era Teenage Mutant Ninja Turtle wagon. I was a big fan of the Turtles when I was younger, a love that has never really ebbed away completely, much as I suggested it never would when I was more youthful. Having found no other candidates by the end of the boot sale, I purchased the wagon and prepped to repaint it in the classic Party Wagon colours. The first step was clear… it would need to be primed and the stickers would need to be removed to ensure that the paint went on smoothly. To remove the stickers, I soaked the Wagon overnight in what started as warm soapy water: 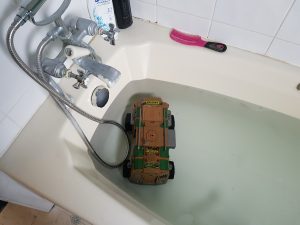 The following day, the water was no longer warm, nor soapy, but it did cause the stickers to come away fairly easily. The glue was slightly more stuck than the paper of the sticker and it required some more elbow grease and a stiff brush to remove the glue, which caused another interesting development:

Some of the ‘metal’ areas were only being vaguely held on with tags, which with some application of brute force I could remove. This allows me to prime them separately. As they are supposed to be metallic, I can use a darker primer paint for these pieces and get a more interesting overall effect. After some very heavy application of brute force, and a few mishaps with the door firing mechanism, I managed to pull the wheels off, meaning I can leave those unpainted.

Having removed the wheels, I found a number of screws that were holding the base onto the sides of the wagon. With some judicious use of my sonic screwdriver (yes, I am that much of a nerd) I removed the base and was finally able to remove the door mechanism, which wasn’t structurally important to the roof of the wagon, thankfully. I have set this aside for now, not sure if I will use this for anything in the future.

Then to prime it, which readies the plastic to receive the paint, I had some leftover white primer from Halfords, technically designed for car paint jobs, which would do the job perfectly. I had purchased the primer for painting the Blue Lantern lantern for my cosplay at MCM Expo in May, and so I cracked that out and prepped the wagon with a good, even base layer of primer:

And that’s about all the time I have for this particular article. I’ll be back soon with some more crafting, where I will start laying down the base colours of the Turtle Wagon, and hopefully will have something else to talk about.