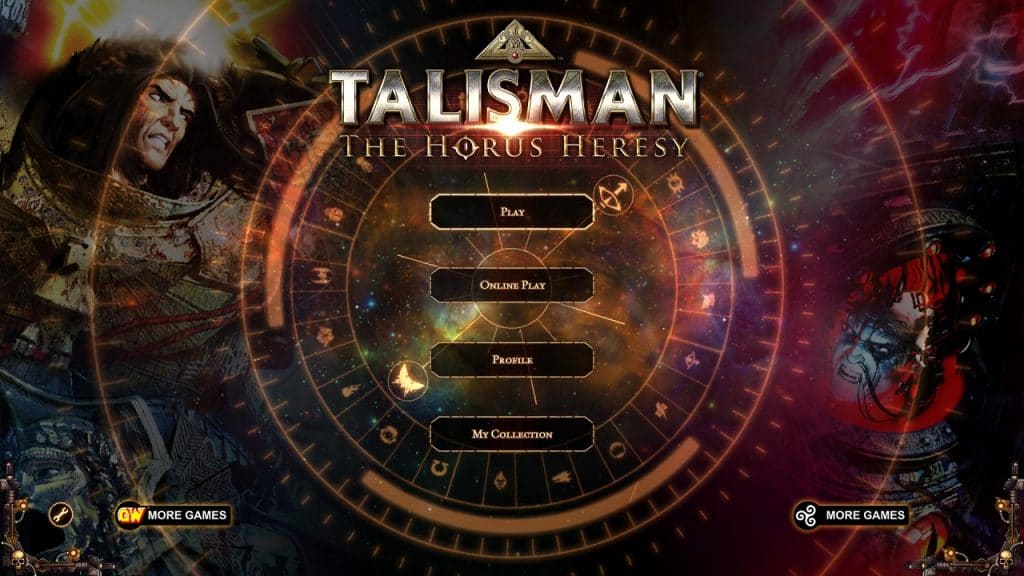 As you are no doubt aware by now, I am a massive fan of the Warhammer 40,000 universe. I recently looked at a game set during the Second War for Armageddon and thoroughly enjoyed it. Well one of my favourite settings from the 40K universe is the Horus Heresy, which really forms the backstory of the whole thing. The Emperor of Mankind leads his legions to conquer the galaxy, only to have some of them turn against him. Led by Horus, the greatest of the Emperor’s generals, and empowered by the forces of Chaos, they plan to invade Terra and take the Imperium for themselves.

When I heard that a game based on the Horus Heresy was coming to Steam I was interested. When I saw the trailer for Talisman: The Horus Heresy I was excited. When Dann told me he had secured an early preview version of the game I immediately grabbed it. Even though I’ve never played the board game Talisman before – in either its physical or digital incarnations – I knew this was something I wanted to play. And I’m always willing to learn to play a new board game.

So far I’ve only played for an hour or so. And already I can tell this is shaping up to be pretty much what I wanted. First of all there’s the board itself. A three-dimensional representation of the galaxy, with a heavily mechanised Terra lying at its centre, the board hits all the right notes – planets and areas familiar to readers of the stories, starships and daemons liberally dotted around to remind you of what sort of place this is.

Then there’s the characters themselves. A wide choice of loyalist and traitor heroes and villains – again all very familiar to those who read the books – are available to choose from, each with their own strengths, weaknesses, advantages and disadvantages. The artwork is straight from the official Horus Heresy art, which lends it an air of authenticity. Even the encounter cards themselves – here called dataslates to fit with the setting – are taken from official Games Workshop art. It all looks amazing and really sells the idea that you are fighting for the future of the human race.

The music sounds amazing too. Music for Warhammer 40,000 has always been grand and epic in scope, with choirs and orchestral instruments, and this is no different. I always say for games like this that I would love to have a soundtrack and it’s just as true here. The music sweeps and changes depending on what’s happening, whether exploring a sector or battling an enemy warlord. Music is always an important part of creating the emotion for a setting and I’m glad to say it seems to be doing its job here and doing it well.

I’ll post a full review once the game is released and I’ve been able to play the finished product, but as I said at the start this looks to be a very good telling of the conflict of the Horus Heresy. There is a genuine sense of urgency as players race to the Vengeful Spirit and the final climactic showdown between the Emperor and Horus. Even though I’m not familiar with the main Talisman game and how it plays I’ve found it fairly well explained and straightforward to pick up and play, and I’m pleased to say I haven’t encountered any real issues that disrupted my enjoyment. I’m looking forward to seeing how it turn out once it’s fully finished.

Previous: Aveyond 4: Shadow of the Mist

Next: Talisman: The Horus Heresy