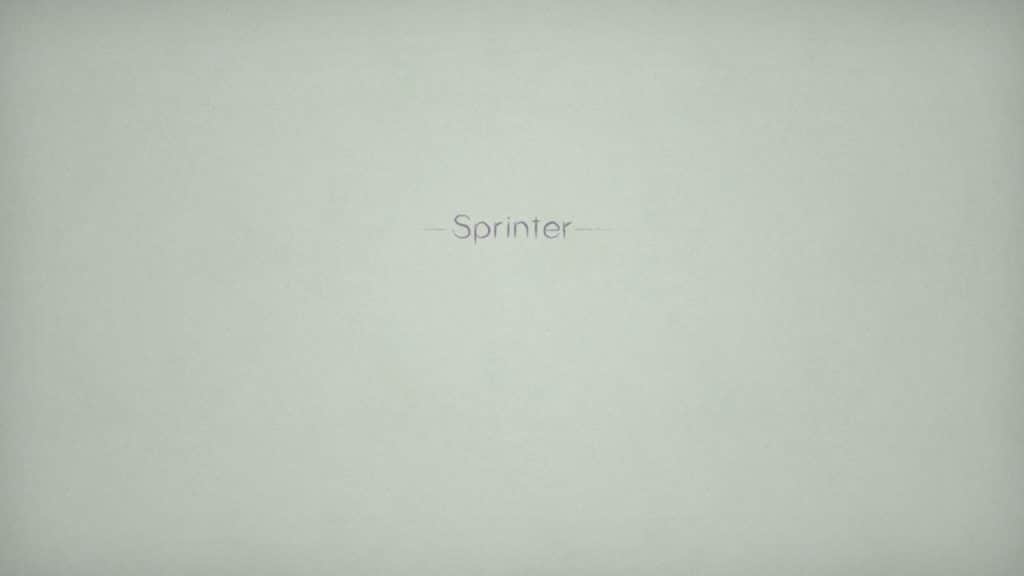 I’ve long since held that games can be a form of art, and there are indeed more than a few games I’ve played that support this – for example Dear Esther, with its rolling hills, sandy shores and haunting music, or the Swapper with its clay-made characters and levels, impeccable puzzle solving, and more than a few disturbing moral questions. Sprinter looked very interesting – a minimalist game where you have to run through line drawn levels, avoiding detection, kind of like Metal Gear Solid if it were drawn in pencil.

There are two distinct sides to Sprinter. First is the story of a family in crisis. As the chapters unfold, you see how a once loving husband and father turns to drink and taking his anger out on his child. You see a mother, once full of hopes and dreams slowly waste away in hospital (presumably the cause of the father’s alcoholism). And you see the child herself as she tries to run away from her life through her music, going out or just being in a different place. It looks like an interesting story.

The way the story is told is well worth a mention too. Still photographs – hand drawn – show different years and how the various family members were at that time. The main photo may show the current situation while, to either side, smaller photos show how things used to be, dating back ten, maybe twenty years. We see the moment where the father proposed to the mother and the joy she felt. We see the child growing up enjoying life and enjoying being with her family. And all of it juxtaposed with images of the mother in hospital, the father in the bottle and the child withdrawing into herself. It’s an effective way of telling the story.

If that was the entirety of the game I would be more than happy. However, there is another side to it. I can honestly say that this is one of the most frustrating games I have ever played. The theme throughout is one of running, of escaping from your life, and the main bulk of the game plays this up to the hilt. You guide a line-drawn character through levels, avoiding what I’m going to term guards and cameras, opening doors, stealing keys, and all of it against the clock.

The first few levels form a tutorial, teaching you the mechanics of the game and how to overcome the obstacles. Push one button and you open a door that is blocking your path. Push another button and you distract a guard, turning him away at the precise moment you run past. Move the right stick up (if you’re on a controller) to disable cameras. Then later on you have to hold down trigger buttons in order to take treasure and steal keys. It’s a lot to take in and keep track of and most of the time you’ll find yourself pushing the button just too late.

And it’s that keeping track of everything that makes it frustrating for me. Each level is timed, and if you go over that time by even as much as 0.01 of a second you fail the level and have to restart. The various buttons to overcome the obstacles require pinpoint precision, otherwise you will be caught, trapped, or worse – gain an extra couple of tenths of a second against your time. A lot is made of cutting corners to improve times, however I was not able to do this – every time I tried I ended up running into the wall, slowing me down considerably.

The introduction of treasure and keys didn’t help much either. Hold down a trigger button as you approach, release it when you pass the item (don’t forget to distract the guard if you’re going for a key), then carry on and open the door, all within a split second. Adding to that is the fact that the zones that you have to release the trigger in are not all that well defined – you have to get quite close to a distracted guard in order to snag the key. Too close and, well, back to the start for you! It all piles up and I found myself mashing the wrong buttons in a panic.

I had a good feeling about this game. The trailer showed minimalist, line-drawn art and a haunting, almost hypnotising soundtrack that evolved as you played, along with a compelling story about a family’s troubles and their struggle through them. They were present but what I got was something that made me more and more frustrated the longer I played. There are two difficulty settings – normal and easier (!) – but really I didn’t see much difference. This is the sort of game for those people who have split second reactions and can take on a lot of information and events happening at the same time. Sorry but I don’t think I’m one of those people.

Previous: FNAF World – Because Sure, Why Not?