Created by Unicube and published by Team 17, Sheltered is a game that puts your survival skills to the test. You play as a family of four surviving in an ex-military bunker after a Nuclear War, however, there are constant threats, such as starvation, and dehydration.

In Sheltered the family are given challenges to try and complete as quick as possible in order to stay alive, However, starvation and dehydration are the least of your worries when there are other survivors trying to either trade with you or join your group.

Sheltered is a very difficult game to grasp and Unicube doesn’t give you many tips to help you, instead, they throw you straight into it. This is both a good thing and a bad thing, as having some guidance would have been helpful but without it, you get that stronger feeling of the struggles of survival.

The game reminds me of a post-apocalyptic version of “The Sims,” another game that also allows you to create your own family that relies heavily on you, the operator, to keep them alive. However, in Sheltered the decisions you are forced to make are harder and have a greater sense of impending doom.

When I first played Sheltered I thought I was going to have to deal with zombies, but there are no zombies in the game which is actually great because you already have enough to worry about and having zombies would make it too generic for the genre. 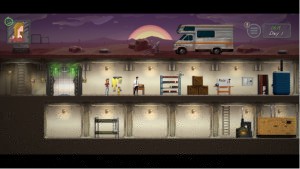 Although the graphics might not show it, I can imagine if there was to be a nuclear war that this is what the aftermath would be like. This is because it has all of the stereotypical props you’d expect to see included, such as hazmat suits and gas masks that can protect you from the radiation. It’s the small and simple elements like that which make sheltered a great game, and being such a realistic game means it will also be complex.

After beginning the game, I quickly realised that I was going to struggle with a number of tasks to do in day-to-day life, such as fixing the generator frequently or even updating the oxygen intake. Furthermore, I really like that you have the ability to speed up the days in the game.

This allows you to fast forward scavenges and work time, however, it can lead to further needs for your family as time progresses. I suggest that when getting this game you do follow the tutorial as it will really help you by teaching you how to craft things, move characters and most importantly, how to survive.

Tip 1: Have the parents hunt and scavenge whilst the children stay back and do all the work. As harsh as this sounds, this gets the most productivity completed around camp and the parents are stronger than the children so can last longer above ground.

Tip 2: Make sure that your water supply is constantly upgraded and fixed. You need water for almost everything in the game, from drinking, having showers and for long journeys. It also makes other essentials such as fuel and food easier to come by from trades or from scavenges.

Tip 3: Always make sure you are going on quests and scavenges. Even though you have raided certain areas already, the game re-stocks them after a while and more loot is given. This is a great feature that Unicube included as it allows you to get new items to upgrade back at home. The further out you go the more likely you are to find better loot, and it does require more supplies to get to there and heightens the risks.

Tip 4: Always build traps/snares. The snares and traps capture live animals on the surface, such as deer and rabbits. These can be harvested for their meat and either used to eat or trade as they are highly valuable. These items are key for getting food and supplies. Before making them, though, you must already have a freezer and a stove. This way, you can either cook the meat or eat it raw at your own risk. I tried eating the meat raw and let’s just say, don’t try it. My character contracted an unwelcome case of food poisoning, and then you have to constantly go around cleaning up for them and it takes days for them to get healthy again.

In my opinion, I believe that Sheltered still has some minor bug fixes that need to be fixed in later updates. While I was playing the game I found that food isn’t as common as it maybe should be, and I found myself losing characters early in the game due to starvation. It seems that either fewer characters need to be set to a player at the start of the game, or more rations should be supplied. I think the animation of the upgrading and fixing stage should be looked into, simply because when you are fixing a sleeping bag, for example, you use a hammer but it looks almost different to the rest of the game’s animation.

In addition, I believe that the Sheltered tutorial has to be improved. It just comes across as too vague, not giving you enough information to help you in the long run for gameplay that lies ahead. it only tells you the basics. I don’t know if this is what Studio 17 wanted but I believe it should be fixed as it causes a lot of confusion and stress trying to work out what to do. 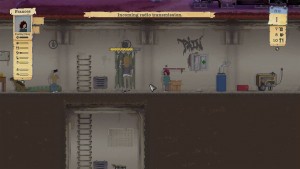 There are also a number of positives to Sheltered. The game does give you endless challenges to complete and quests to keep you entertained, so you shouldn’t get bored quickly. Also, I like the way that they incorporated the family feature. This is quite an integral part of the game and even enables you to name and create your characters, giving it a more personal touch.

You can also have pets in the family which have different qualities. For example, there is an option for a pet horse, which is good for making faster trips, but you must keep it healthy! This will cost you food and if they were to get radiation poisoning it would also add to the costings of the tablets that they offer as a cure. This adds an even bigger dilemma to the game and allows you to make a choice if you are to take care of it or not. You then have to make the decision, is it worth the supplies to own a pet?

My overall review of Sheltered is that it’s a very realistic narrative based game. Although when it comes to the graphics it suits the style that they’ve gone for, however, they could have gotten away with using more shading techniques and some more detailed textures to really make the game stand out, and this sort of art style is certainly one that Team17 are very experienced with. This has been my first experience playing a Team17 game and I really enjoyed it.

It was a good experience and I believe it is definitely worth the price if you are into games such as Sims or generic survival games. Sheltered is designed to test your knowledge and your gaming skills and always keep you on the edge of your seat. The game is now available on the Steam store, on Xbox Live and the PlayStation Store, can you rise to the ultimate survival challenge?