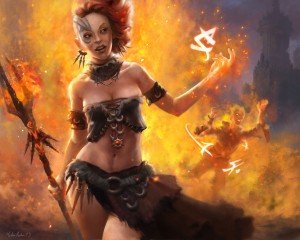 Before I truly launch into this review, I want to make one thing clear. I have really been enjoying what I have played of Spellweaver. The game is well put together, and after I finish this review, and when the game launches, I will be continuing to play the game for a while at least to see how the game develops following launch. I say this first because I fear that a lot of what I am going to write after this could be construed as negative, which isn’t entirely my intention.

Spellweaver is a Virtual Trading Card Game designed by a Magic: The Gathering champion player, and it really feels heavily inspired by Magic itself. The game breaks down the basic cards into 6 different colours, each with their own flavour. Order deals with angels, while Corruption deals with the demons. Wisdom focuses on magic and counterspelling, while Nature takes on the elves and their large creature allies. Dominion deals with the Dark Elves, while Rage concentrates on Goblins and other small quick creatures.

During matches, each of these decks require the use of Shrines to pay for the creatures and spells. Like in Magic, or Hearthstone, you need to have the Mana to pay for a card on that turn, but unlike either of those, you also need to have a certain Level to summon creatures or play spells. Both of these resources are paid for with Shrines. Mana refreshes at the start of every turn, so once you have paid for it, you have that level of mana for the rest of the game. 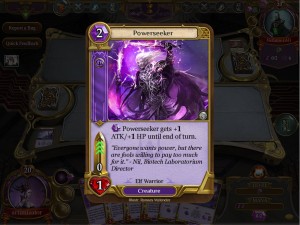 Once you actually have some monsters on the field, you’ll want to start attacking your opponent to whittle down their life points, causing you to win the game before they can do that to you. However, all of the monsters in Spellweavers come with one of four levels of speed. You’ll need to pay attention to this, as you’ll need to be faster than your opponents creatures to block them. However, before you throw all of your monsters into an attack, you need to keep in mind that monsters that have attacked will be too tired to defend you… if that is something that your deck needs.

One of the weirdest things that I noticed while playing through some of the matches that I played to write this review is that several of the cards make reference to things that are not needed for online or virtual card games, such as shuffling the deck after finding a card in it, i.e. Battle Brothers, which allow you to freely summon a second copy when it enters the battlefield as long as there is another one in your deck. This adds to the feeling you’re playing a digital copy of a physical card game – which you’re not – and, is a nice touch. 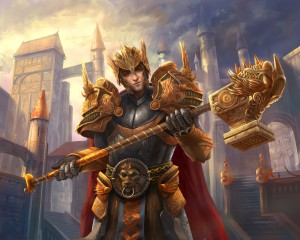 When the game first starts up, you are entered into a tutorial match which runs you through the basics of the gameplay and explains you through a few rounds of pre-structured combat, allowing you to play the game without the chance of losing, and to ensure that you know all of the rules of the game that they are trying to demonstrate.

I did have a slight issue when I was first playing the tutorial as I apparently managed to click through a Shrine card before the tutorial expected me to, using it for the wrong thing and sending it to the graveyard without a replacement in my hand. When the next tutorial message loaded, it was pointing to the card sitting forlorn and used in the discards, and I was unable to advance to the next part of the tutorial. This, however, I assume is because the game was in early access, and has now been fixed. 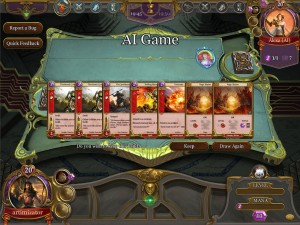 The game moves very quickly, especially when playing against an AI opponent. My early matches, which I played during some of the quieter hours of the day, against the AI saw the opponents’ turns zip past at such speed that I couldn’t take in what they were doing. This caused some issues with learning the mechanics of the game, how certain cards interacted with others, and it meant that as I finished my turn the opponent would have played a card and dispatched my defenders without me having the opportunity to see what happened.

When attempting to find a match against a human player, the tool tip does mention the best times of the day for your region to quickly find a match up which is helpful and will hopefully allow you more chance to schedule your playtime alongside other humans, if you find yourself tiring of taking on the AI opponents.

I had a quick look at the deck building side of the game, but for the most part I played using the standard pre-genned starter decks that you can purchase. The building of decks works quite nicely, you are presented with a list of the cards that you currently own, either from the starter decks themselves, packs that you have opened, or rewards for completing the various quests. There’s little telling you how to put the decks together, however, which could easily be added to aid those not quite as skilled at deck creation. 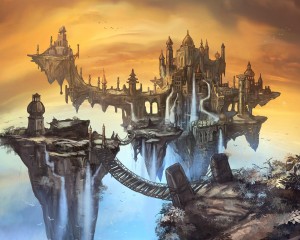 The game’s soundtrack is ambient, which as much as it isn’t required to play the game, doesn’t detract from the experience.

The game overall doesn’t add a lot new to the genre, but does feel very polished and have lots of room for expansion. I look forward to seeing where this game goes after launch, if you’re a fan of other card games, this might be a game to check out.