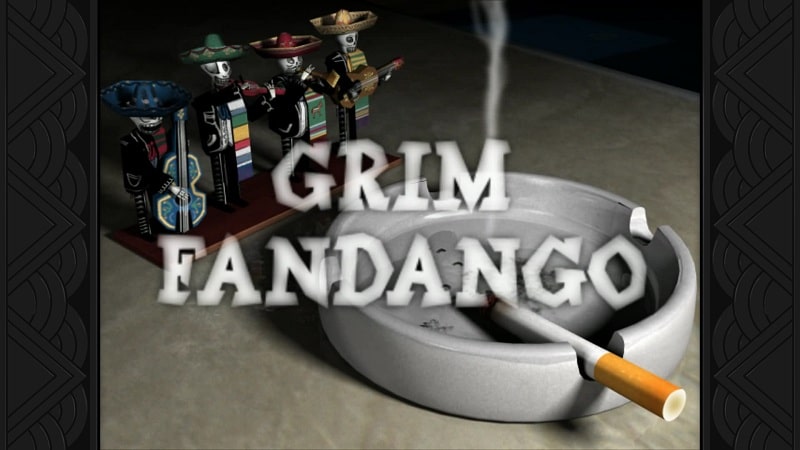 If you are a gamer of a certain vintage (say 20 – 25) you may remember a little known company called Lucasarts who specialised in, amongst other things, Star Wars games, Indiana Jones games and point and click adventure games. In their heyday Lucasarts produced some of the best known adventure games of all time – the Secret of Monkey Island, Day of the Tentacle and Full Throttle to name but a few.

Towards the end of this period Lucasarts made a game called Grim Fandango – a game about death and what comes next. As Manny Calavera, travel agent for the dead, the player was drawn into a story about conspiracy, intrigue, all the classics of the film noir genre. All this took place in a world which drew heavily from the Mexican Day of the Dead. It could be a frustrating game at times, with some puzzles lacking a logical solution and often forcing trial and error, but the story was unique and the world and characters truly unforgettable.

On modern machines it shows its age, with jagged visuals and a clunky navigation system using the numpad. The camera tended to be extremely unhelpful, with the angle changing suddenly forcing you to change direction, and somewhat imprecise interaction controls meaning you had to position yourself in just the right place. Thankfully, these are mostly addressed with the new remastered version.

The biggest and most obvious difference is the graphics which have been given a thorough overhaul and upgrade. Gone are the jagged low resolution objects and in their place are smooth surfaces. If you want to compare the two you have an option to switch between remastered and classic visuals. The difference between the two is very obvious, even to my untrained eye. There are also options for aspect ratios to suit modern display settings, with a rather nifty mexican themed border filling in the gaps if you so desire.

The other huge improvement – and to me probably the biggest improvement of them all – is the control system. As I said above, previously you had to use the numpad to move/talk/pick up/interact with objects and people and it could be a bit hit and miss, especially with the seemingly random camera changes. Now, there’s a completely new point and click system, with each usable object highlighted when you move the mouse over it. Clicking the mouse produces a menu from which you can choose how to interact with the object. The old controls are still available but for the life of me I can’t think who might use them.

I haven’t played through the entire remastered game but I can well remember my previous outing, with certain puzzles that were made more difficult due to the controls and I can see the new mouse system being an absolute boon. There are plenty of other games that could benefit from this – for example Escape from Monkey Island, in which I had to use a joystick as there was no proper keyboard support at all!

There are other tweaks and updates, and these are mainly to the menus. As you may expect from a remastered version of a game there are new options available, including the aforementioned graphics settings and also a director’s commentary, which seems to be quite interesting. When activated, icons will be displayed in the corner of the screen. Clicking these will play a clip of the game’s directors and producers – including Tim Schafer – which give insights into the relevant parts. I may have to investigate these further as I love this sort of thing.

Another touch is the save screen. In the olden days of the original Grim Fandango this was a frieze with Mexican Day of the Dead iconography, which would slowly uncover and build up as you went through the game, giving you an idea of how far you had come and how much was left to go. The frieze still exists in the remastered version, but instead of the blocky uncovering it lights up as more progress is made. To be honest I don’t know if I prefer it this way as the blockiness of the previous version really fitted in with the whole design aesthetic, but hey at least it’s still present in some form.

In summary then, if you played the original Grim Fandango and want to revisit it the remastered version is definitely the way to go. The great things you remember are still there and the things you didn’t like – *ahem* controls *ahem* – have been improved. If you didn’t play Grim Fandango and you’re a fan of quirky characters, intricate stories and great humour then this is definitely a game you should try. It’s a fantastic piece of history from a time when point and click adventures were just coming to an end, before companies like Telltale and Double Fine (who produced this updated version) took up the baton and reinvigorated the genre. As such, it’s well worth a look.

Next: Ore no Yome ~Anata Dake no Hanayome~