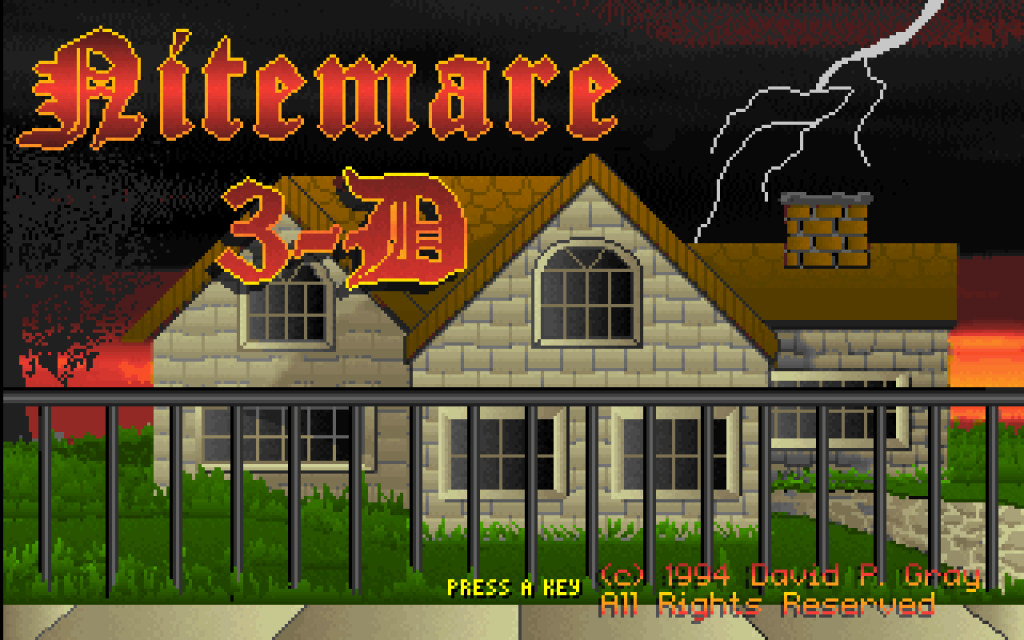 Nitemare-3D is a horror themed first person shooter by Gray Design Associates. It holds many a happy memory as one of the very first video games that really had me hooked, and I mean ‘sit there for hours at a time’ hooked! I remember skiving off school at the tender age of 11 just so I could fake being ill whilst playing this bad boy on my old PC (back when Windows XP was a thing) – a PC that was roughly the size of a small house with a garage and extension built on the side.

I was quite a few years late to the party, as I am with most games, because I was only about 2 when it was released in 1994. It was originally released for DOS and Windows 3.1x platforms and is made up of 3 episodes, each consisting of 10 levels. Despite the first release being nearly as old as I am, and originally on two 3 1/2” floppy disks (oh how retro) and a good 7 years old when I first played it, it remains a timeless classic in my book, even today along with a walking stick at the ripe old age of 22 years. 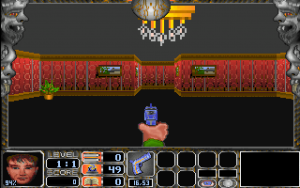 Nitemare-3D is made up of rudimentary 3D graphics with areas divided into rooms using a grid based scenario of walls and doors whereas the characters themselves remain 2D. There are 3D decorations throughout the rooms including bookcases, decorative plant pots, fireplaces, weird gargoyles, stained glass windows, and various tables and chairs with the floors and ceilings remaining textureless. All very basic, all very much pixelated. By the time I got my copy the character graphics had already been updated from hand drawn to pre-rendered so I have no experience with the original graphics, although the items and general decorations have remained unchanged.

Nitemare-3D is a sequel to the EGA adventure trilogy “Hugo”, which was released before I exited the womb, so I skipped out a chunk of the story before I even started playing, but even at the age of 11 I found it pretty easy to follow despite, you know, being 11. Hugo’s girlfriend, Penelope has been abducted by the evil Dr Hamerstein who intends to carry out heinous experiments on her. Bit cliche but easy to understand from the get go if you haven’t played the earlier games. Swings and roundabouts and all that jazz, and in all honesty, as long as you are familiar with First Person Shooters you’ll find it pretty damn easy to pick up as it adopts the classic ‘kill everything that moves and collect everything that’s shiny’ theme. You must battle through 30 levels of monsters, including bats, vampires, Frankensteins, skeletons, witches, ghosts that spit fire, and even Dracula himself, all taking place throughout the Doctor’s mansion, underground laboratories, a plasma core, and alternate dimensions in order to save Penelope before it’s too late.

The gameplay itself is very puzzle oriented which mixes things up a bit by adding an element of adventure rather than just your average “shoot the shit out of everything”, as with most simple first person shooter titles. 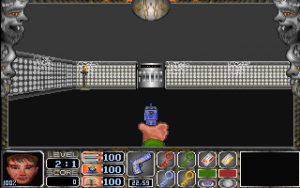 Worth adding in a bit here about, “As previously mentioned, the title comes in three episodes, each one has their own narrative with Episode 1 seeing your aim to make your way through….

Your aim is to make your way through the maze of rooms towards various portals that take you to the next level until you reach a mystical mirror which will carry you to “the other side” where you will finally be able to confront the mad scientist, Dr Hamerstein, who is holding your beloved captive. Along the way you discover many secret rooms behind hidden panels, sliding bookcases, and exploding walls. You’ll have to collect keys and ID cards scattered throughout the levels to open doors to progress further within the levels of the game. Each hidden section opens up more of the map leading you to discover an essential section of the horror filled storyline with some leading purely to power ups.

After discovering the power of the Plasma Core and failing to defeat Dr Hamerstein, Hugo finds himself in yet another labyrinthian of monsters. The aim of episode 2 is to find and destroy the Plasma Core, the source of Dr Hamersteins power! This episode is patrolled by Dalek-esk robots and the general gameplay is pretty much the same setup as Episode 1 with the only real difference being the wall textures. 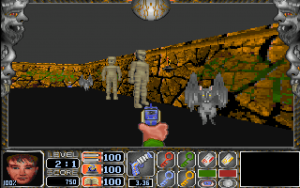 After successfully destroying the Plasma Core and rendering Dr H powerless, Hugo must now commence his quest to find and finally destroy Dr Hamerstein and rescue his love. They really up the game with the graphics on this level by introducing fiery demons and creepy gothic stone chapels where you are met by fire breathing ghosts and aliens.

It’s pretty easy to follow and the game holds your hand rather a lot with its continuously updating map powered by collecting floating eyeballs, which also shows enemy locations, making it pretty impossible to go wrong. Having said that, without the map being present, you’d just be relying on the corridors alone, and with a simple, repeated texture strewn across them all, it can be fairly easy to get lost amongst the labyrinth-like layout.

Controls are pretty simple, I am more of a console gamer these days and struggle a bit with PC games that have actions for 99% of the damn keyboard, but this game keeps it easy with the main controls being the arrow keys, spacebar, and CTRL button to move and shoot. Weapon selections are the first four number buttons with a few F keys to open up more of the HUD. In other words, it’s manageable. 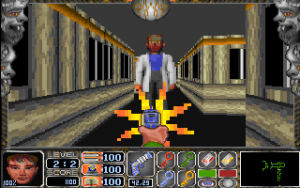 There are four different weapons to find throughout the levels, with each one being tailored to cause more damage to certain types of enemy and resistant against others , eg. the Plasma gun hardly touches the Ghosts yet the Magic Wand rinses them in seconds, rather than differing only in the amount of damage on a whole. There are four weapons in total:

Plasma Gun – This weapon you’ll find in the first room as you begin the game. It shoots blasts of energy with a satisfying “PEW” and will do damage to most enemies.

Magic Wand – Oh how delicately Hugo holds this glitter filled star on a stick complete with a princessy sparkle sound effect. Not the most scary looking weapon, but this pretty old thing is probably one of the most powerful in the game. It does cause a truck tonne of damage to any magical monsters you may encounter.

Pistol – This baby is loaded with silver bullets and is most damaging to the supernatural enemies of the game.

Auto Repeat Plasma Gun -Basically the same as the Plasma, but automatic, and it even uses the same ammo. Nothing else particularly special about this one really.

In conclusion, I really do love this game. It may not be in 4K with ragdoll physics and dazzling special effects but for its age it’s a cracker, and it’s always good to go down game memory lane once in a while.