M – Road warrior is on the hunt 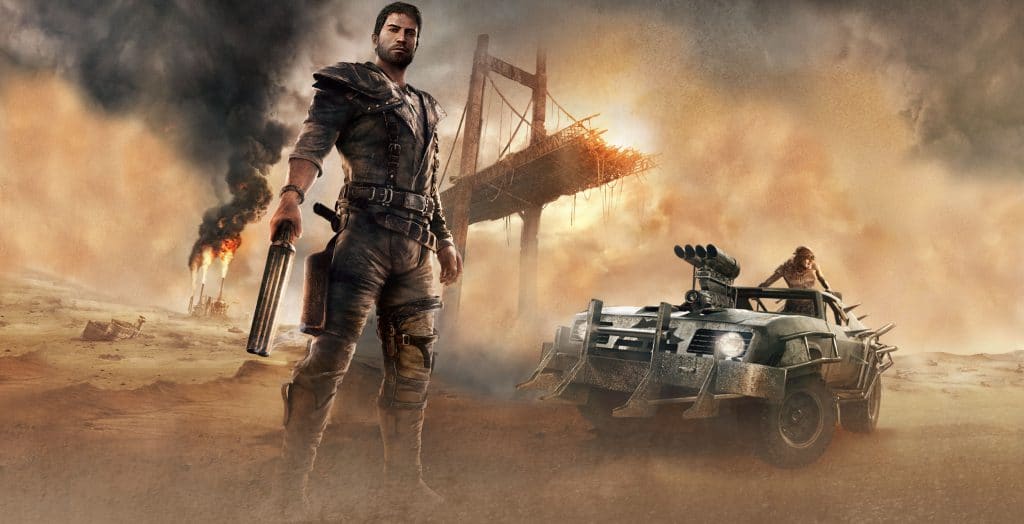 It’s that time of the month again where we delve into the hell spawned vault of despair, where Dark Soul bosses reside and Grinding camps were invented to find the hidden life power up we all need at least once.

This month’s Alphabet is staying close to home to 2015, where a classic car is ridden hard and the fumes of V8 engine waft into the desert proving you with an ominous camouflage. We are indeed talking about the re-imagining that is Mad Max, by Avalanche Studios.

Mad Max begins and ends the exact same way: with our rough and ready hero behind the wheel of a car, alone, speeding toward some his ultimate destination. It’s the essence of the character, a man who tells himself he neither needs nor wants the responsibility of looking after other souls. It’s jarring, then, when he spends the 40 hours between those two scenes intertwined in the lives of every single survivor of the apocalypse. Not directly based on the films, this game tells its own tale, while still borrowing the odd detail from its cinematic siblings. Haunted by the loss of his family as the world fell, Max travels the wasteland searching for the Plains of Silence. This isn’t a journey of hope but one of survival, as for this unhinged hero, driving in search of the plains – which may or may not exist – is all that he has left. Unfortunately, the brakes are put on his search when his car’s stolen, and he’s left for dead following a run in with the unfortunately named Scabrous Scrotus. Never one to take this sort of thing lying down, Max must work to rebuild his car and get the V8 engine he needs to continue his journey.

It wouldn’t be much of a Mad Max game if you spent all of it running around on foot, so it’s not long before you come across Chumbucket – an exiled mechanic from nearby Gastown – who sees Max as a saint who’ll help him build his ‘Magnum Opus’, a car that’ll be the best the wasteland has ever seen. Starting with a basic chassis, most of the game is spent working to add more and more parts to your increasingly powerful ride. During your Journey, you will also see and hear many obvious references to the films, like Max replenishing his health by eating Dinki-Di dogfood, a nod to Road Warrior’s food of choice. But there are more subtle examples, as well. A notable landmark is a giant statue wearing the same robes and holding the same stance as the briefly seen Dr. Dealgood from Beyond Thunderdome. One warlord dwells in a canopied structure inside her fortress modelled after the one belonging to Tina Turner’s Aunty Entity.

The gameplay revolves around exploration and great combat scenes, which are found in Max’s quests, set in three distinct wasteland clans all populated by the same enemy templates. Wherever you are and whomever you’re fighting, strategy remains identical. Fisticuffs have a satisfying crunch but are rarely challenging. Most enemies generously telegraph their maneuvers along with the appropriate button press needed to parry or dodge their strikes. The only time you’re in danger of being beaten down is when you’re vastly outnumbered and surrounded, but since most scuffles have three or four opponents waiting patiently as you repeatedly pound their companion’s head to mush against a pile of gas cans, you can easily emerge victorious from most encounters. One exception is when you initiate an attack one of Scrotus’ many outposts or oil reserves. Suspended above the central arena inside these strongholds will be a War Crier. Roughly modelled after Fury Road’s blind guitarist, the Crier bangs on a drum and riles up the War Boys. If he’s allowed to play long enough, he will buff up your opponents and make your fight much more difficult.

When murdering on foot becomes too tiring, Max can just hop behind the wheel of the Magnum Opus, taking down other vehicles with a dirty combination of collisions and makeshift weaponry. Starting with a basic chassis, most of the game is spent working to add more and more parts to your increasingly powerful ride. As a result, there’s a decent level of customisation available, and you can go whichever upgrade route you want, whether you’re after a fast, lightly armoured car or the four-wheeled equivalent of a tank, that’s a beast to try to keep on the road. Fortunately, you’re never locked into one type of car, and can switch out individual parts easily depending on the situation, even changing your whole ride between different unlockable car templates – known as ‘archangels’ – if you fancy big change. While you can also steal cars from the war parties you battle, you’ll be spending most of your time in your own personal ride, as you’ll have invested a significant amount of time in making it more like a car Mad Max would drive by adding weapons and modifications.

As you explore the map, the sheer volume of quests, activities, and locations becomes quickly apparent, and your early impressions are likely to be good, as you’ll have fun visiting scavenging locations to collect scrap, using balloons – the game’s equivalent of climbing towers – to survey points of interests, and destroying enemy camps and watch towers, which have the added bonus of lowering the presence of enemy war parties in a region. Creating a visually interesting open world when all you’ve got to work with is essentially a wasteland is quite hard, so Avalanche Studios should be commended for creating a playground that’s varied, taking you across a landscape that has you racing through rocky valleys one minute and over a sea of sand dunes the next. Mad Max is at its best when it offers some of that silence its hero swears to seek. It’s when Chumbucket shuts up, when no deals need to be bartered, when you can just drive—just you… belching out fire and black smoke across the highways, in your mean machine.

Previous: Sniper Rifles – Reach Out And Touch Someone