An office worker who wakes in the basement of a red coloured factory, he doesn’t know who he is, why he is there or why the name Klaus is on his arm. 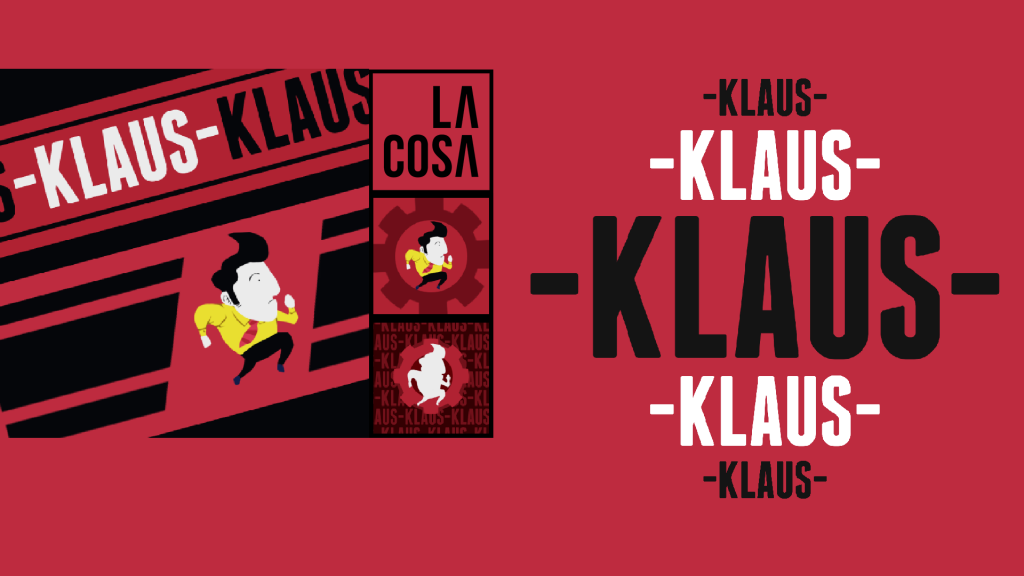 In short KLAUS is a fun, stylistic puzzle/platformer that will have you question a gaming character’s reality. Originally on Android KLAUS has moved to Playstation 4, and later this year will arrive on the XBOX ONE and Steam.

Hey, Klaus. Do you ever wonder why we we’re here?

KLAUS has you take control and care of an office worker who has awoken in a basement of a questionable factory. With no memory of who he is, only the identification, only the word “KLAUS” tattooed on his arm as a clue to his life. As he explores the ever growing sadistic building he starts questioning his existence.

In the beginning he is ambiguous to your actual existence but with the strange concurrences he projects them on to your non-corporal entity. He’s not sure whether to trust you but your continued help has him quickly believe that you care for his safety. Is he delusional or just suffering from Stockholm Syndrome? Klaus breaks the forth wall by talking directly to you, the player through text pop ups; allowing you to delve into how he deals with adversity and his personal character.

He holds up rather well as his state of existence is a little out of whack as he reveals, that when the camera view overtakes him he will die.

You control Klaus’ movements with the standard platform controls of left-right, jump and double jump. But, in the game’s narrative he believes he is in control of his body. To separate itself from traditional platformers is in your ‘role’ rearrange moving platforms through the touchpad mechanic, thus, allowing Klaus access to new areas, protect him from spinning blades of death or deliver randomly placed keys. The latter aspect allows for interesting doses of problem solving when Klaus can only move in one direction.

Upon seeing KLAUS for the first time it appeared to be a precision platformer much like Cloudberry Kingdom or Super Meat Boy. My fears were allayed due to the use of the Dualshock 4’s touch pad as this requires you to change inputs. This slows down the game in its benefit adding to the tension during moving camera death levels. Switching from analogue sticks to touch pad is a fumbling experience; I had to break eye contact from the screen to make sure I was holding the controller safely before using the pad. This problem is due to the design of the controller and not the game itself. If one positive factor from the Vita could be taken it would be the touch pad on the rear of the handheld. A rear touch pad on the Dualshock 4 would have been far better suited. It would also sort out the ridiculously small and awkwardly placed Share and Options buttons. The touch pad is a must for RTS games, such as Nobunaga’s Ambition but it seems out of place. While the touch pad is an integral mechanic to gameplay, and does what is needed to help you solve puzzles, I found it is too responsive at times manipulating the interactive environments.

Klaus knows what type of game it wants to be by giving the player less in visual design and working from there. The animation is very fluid in game but when you are sucked into the secret areas (which aren’t very hard to find) it is very jagged set to a disturbing growl of a noise. In these levels, you search for pieces of a door that, when formed, will unlock parts of Klaus’ memories. The existential design kicks in, warping what you see so you question your own motions on how to complete the levels. Does Klaus have lice? No, you’re just walking over hundreds of Klaus’ silhouetted heads.

With a minimalist aesthetic and an electronic soundtrack, KLAUS will appeal to gamers both for its style and unique gameplay experience. The game’s ingenuity towards puzzles with it gameplay style is both a pro and a con, with  the awkward re-positioning of players’ hands to solve them, which, again isn’t La Cosa’s fault. The other downside: ‘Klaus’ feels a little bit of a chore the longer you play for, which is strange as the game is not difficult in the early levels. Klaus’ affable character development didn’t feel as big of a hook as it should be to have me power through and find out more.

Niggling gripes: I had a couple instances of freezing to a complete lock, forcing me reset the console, and the loading screen felt longer than it should have been.

The positives out weigh any down sides I consider the game to have: good level design and a difficulty curve that throws new contraptions at you without being overwhelming. The music is rather ominous in the right places and not falling into annoying. I highly recommend the game to all, you will find something in there for you; namely finding out what is on Klaus’ mind.

Next: FNAF World – Because Sure, Why Not?