FNAF World – Because Sure, Why Not? 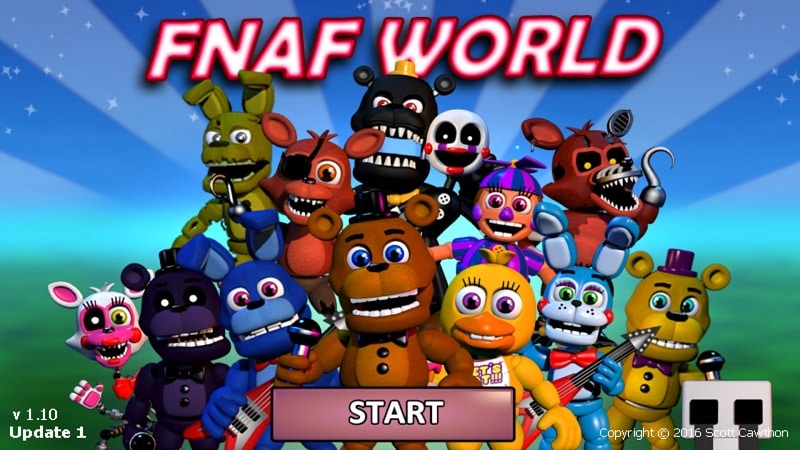 In a very recent episode of the Final Boss Fight Emergency Escape Podcast (which is awesome and you should subscribe to it), mention was made of the news that Five Nights At Freddy’s World – more commonly known as FNAF World – had been re-released and is available for free after a much publicised withdrawal from Steam. Someone on the podcast made a comment along the lines of “who would want to?” and I thought to myself “why not?” I’ve never played any of the Five Nights games – I hate jumpscare games and watching Let’s Play videos on YouTube is enough for me – but I thought I’d give this game a go and see what it was about.

FNAF World is a markedly different game from its predecessors. Where they relied on creeping horror, jumpscares and survival, FNAF World is a lighthearted RPG starring Freddy and his friends and set in the world they inhabit. Originally released in January 2016, the developer – Scott Cawthorn – quickly withdrew it from sale after many reports of issues and missing features. The story has been gone into in great detail elsewhere so I won’t go into it here. A new version was released in early February, and this is the version that is available for free download.

After a rather ominous opening in which two glowing eyes declare that they will “put me back together”, I am asked to choose not one, but two parties from available characters. Initially only eight characters are available, and these are handily grouped into two groups of four. There are many others on the screen that no doubt will be unlocked over the course of the game. I am then dropped into the world. A bright, rolling landscape with colourful trees, buildings, and many strange inhabitants.

I am immediately met by an animatronic bear – no doubt the famous Freddy, or at least one of his variations – and told that things are going wrong in the village where Freddy and his friends live. Something about the flipside causing lots of problems and turning lots of normally harmless creatures into monsters. I’m not sure how this fits into the general Five Nights story – I have only seen glimpses of the other games remember – but it seems a plausible explanation of what is happening in the real world.

And so, without further ado, I am sent on a mission to investigate and fix these problems. What is interesting is that the characters know they are in a video game, or at least a computer system. Shops offer items called chips and bytes which improve your party, armour is provided in the form of endoskeleton upgrades, and there is much talk of glitched objects. My first encounter with a glitched object was a real “What the heck” moment, as suddenly the world changed from a bright friendly landscape to a bunch of lines, similar to an old game from the days of the Commodore 64. This did allow me to access some new areas and proceed with my quest.

Gameplay is easy to pick up. Moving around the map is accomplished with WASD, while interactions and literally everything else is done with the mouse. Combat is fast paced and – dare I say it – fun. Your party and the enemies have menus with attacks to choose from, only the fight does not pause when you do so, with the result being a spectacular explosion of various attacks. You can also switch to your other group at any time, so if one group gets stunned the other group can jump right in. The animations of the characters and attacks are fun to watch and I really enjoyed the constant activity on the screen.

I do have to talk about the music. It was recently pointed out that I do like my soundtracks and it’s true. Here the music is fast and upbeat, especially the battle music. Bosses and character battles have their own music which is more sinister sounding but really the composer did a great job with this one. Outside of the battles, the music is more chiptune based but still quite jaunty. The graphics themselves are great in the battle sequences, but on the overworld they’re a bit clunky and blurred. I do have to say that the world map looks like something from the 16-bit generation, which could work against the game in the long run.

All in all this is not a terrible game and you could do a lot worse for a free download. The game does a good job of showing a bright happy world on the surface with something sinister lurking underneath – much like the main games themselves I imagine. The sheer number of characters should be enough to keep fans playing and, as I said, the combat is immense fun and is really the best part of the whole thing. So if you want to give it a go there’s really nothing to lose. You may even enjoy it as I did.