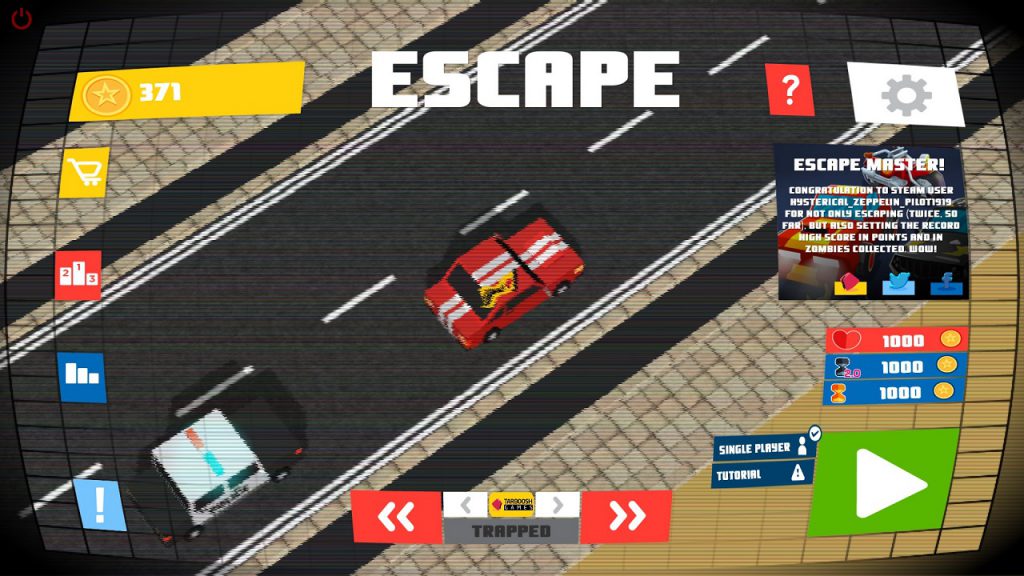 Escape: Close Call at first glance reminded me of the original Grand Theft Auto. The top-down view of a car madly swerving around to escape the cops certainly helped, but after playing a bit – actually a big bit – of Escape: Close Call I found it to be a very engaging, enjoyable and fun game. It’s actually one of the most addictive I’ve played recently. I certainly had a hard time putting it down, always going for one more go.

Developed and published by Tarboosh Games, Escape: Close Call has a very simple objective – escape. You’re not told what you’ve done or why you’re on the run from the cops, and it doesn’t matter. You just start driving the car and avoiding more and more police cars as they gang up on you and attempt to trap you in a corner. Oh, and these cops aren’t out to arrest you. Give them half a chance and they will crash into your car, blowing it up and bringing your attempt to evade justice to an end.

Driving your car – as in moving it around – is very simple. You have the choice of using either a controller or the keyboard’s arrow keys to steer your car in a direction. The car moves forward of its own accord – no reversing or three point turns. If you find your self trying to drive through a wall you can just turn your car to the side to get out of it. Easy, right? Of course there is the small matter of all the enemy cars chasing you trying to blow you up.

Fortunately, there are other tools in your motorised arsenal. The most prevalent of these is standoff. By holding down a button you can drift your car in a rather spectacular slow-motion maneouvre. This can be used to swing past obstacles, around corners and even to narrowly dodge those pesky coppers. As you rack up points by avoiding cars and running over zombies – oh, by the way there are zombies in this game that spawn from the wreckage of crashed cop cars – you can buy upgrades to improve your vehicle. And this is where the real fun of the game is.

At the start of your criminal career you are the proud owner of a run down old junk heap. The slightest touch will send you sky high and the fuel tank lasts all of no time at all. As you complete objectives and build up your score you have the opportunity to improve matters, starting with the fuel tank. As you get more and more points you can buy turrets and heavier armour to make your life easier. Furthermore, you can unlock new vehicles, aircraft and even a tank. It really gives you something to keep coming back for.

New features and updates are added regularly by the devs, with some of the most recent being tutorial missions to teach you about manoevring your car and using standoff. There are other stages available, including an army base with missiles and defence turrets, and these will no doubt become available as you progress through the game. There is also a free mode – which I haven’t tried yet – that allows you to drive around without worrying about being chased. There’s even VR support for total immersion.

As I said, I’m really enjoying this game. Once you get past the idea that you’re not going to do very well at first, at least until you unlock more upgrades for your car, you can have a really fun time. There is something incredibly satisfying about drifting past a group of cars, causing them to crash into each other, causing more zombies to spawn which you can then run down. Doing so causes your screen to distort for a few seconds, making things just that bit more challenging. At the start of each run you are given three objectives – which, truth be told, could do with staying on screen a moment longer before disappearing – and these persist across runs, so that when you’ve completely finished one set you get a new set. It’s a good way of making you try new tactics in your bid to escape.

There is probably a lot more that could be done to polish things off but as it stands Escape: Close Call is a really fun game you can just pick up and play without too much trouble. Of course, putting it down again takes a lot of effort and willpower – there’s always time for one more go – but agian that’s the sign of a great game. There is a lot to keep coming back for, with upgrades, new vehicles and levels to unlock, so you will really get a lot of enjoyment out of this. Now, if you’ll excuse me, there’s an upgrade that gives you fuel when you run over zombies that I want to try out.

Previous: Talisman: The Horus Heresy – I was there

Next: Quantum Break – The Iceman Cometh