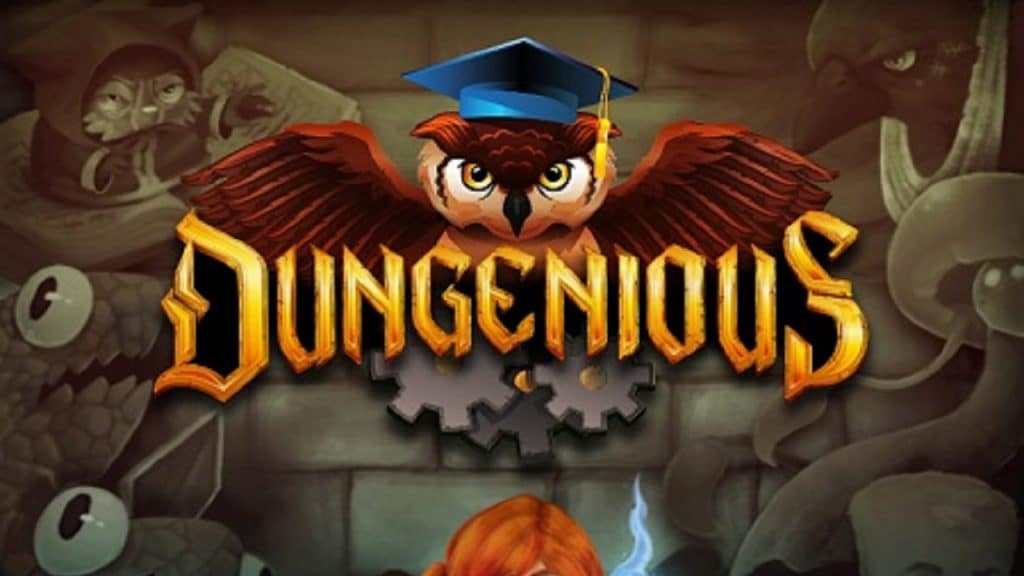 Dungenious is a mobile game from Noizoo Games that combines an educational quiz game with a dungeon crawling roguelike. The website – www.dungenious.com – invites you to “challenge your knowledge while you battle monsters, upgrade your hero and explore the dungeons”. The story is that all the knowledge in the kingdom has been stolen by evil owls, and it’s your job to get it all back, one fact at a time.

There’s very little preamble when you start the game – you pick your hero, pick a subject you would like questions on – and there is a very extensive list, ranging from historical topics like inventors to foreign languages and even somewhat specialised topics like binary numbers. When you’ve picked a topic that you like the look of you are dropped straight into the first room of the dungeon.

Movement is very simple. You swipe up, down, left or right to move one space in that direction. After you’ve moved, all the enemies currently on the screen will also move one space. They won’t move unless you move, so you can take your time to plan your route through the room, avoiding traps and collecting chests. In order to move to the next room, you have to defeat all the enemies. Some chests are traps, spawning more enemies if opened.

Actually attacking enemies is where Dungenious gets interesting. You can attack an enemy at any range, as long as it’s in line with your character and there are no walls in the way. When you attack an enemy you are given a question relating to the subject you’ve chosen. It’s a multiple choice question with four possible answers. If you get the answer right you deal damage. If you get the answer wrong nothing happens and you have to attack the enemy again.

However, you are timed. If you get the answer right before the time bar ticks too far down you deal extra damage, whereas if you are too late for that but answer within the rest of the time limit you deal normal damage. It’s the difference between defeating an enemy in one hit vs three hits, and when enemies start piling up on you that extra few seconds before answering makes all the difference.

Dungenious actually assumes no prior knowledge of the subjects it offers. Remember it is designed to be an educational game. So the first enemy you encounter will be a special enemy – an owl with a scroll – and attacking it will give you a fact, and then ask you a question about that fact. Attacking another such enemy will teach you a different fact. Dungenious also plays fair with you in that it won’t quiz you on something it hasn’t taught you yet. For the first few rooms this is quite easy as you will only have two or three different questions yo ucan be asked. As you progress through the rooms it gets harder since you have to hold more information in your head, and it’s very easy to skip the fact before taking it in properly.

There are different enemies to encounter on your travels. There are the owls, some of whom teach you new things and some of whom don’t, there are wooden deer who are sleeping until you enter their line of sight, there are rats that move two squares instead of one and who can distort answers to quiz questions, and there are boss battles. Oh boy, the boss battles. These usually take place in rooms that also contain moving fireballs, meaning you have to fight the boss while dodging the flames. Bosses can also use extra skills against you, such as freezing you in place forcing you to miss a move. They also tend to have a lot more health, meaning more attacks are necessary, and again driving home the importance of answering questions quickly.

As well as attacking with knowledge you also have an array of skills to learn and improve, such as raining fireballs down onto the map or healing yourself. These can help you remove health from enemies before you fight them – which comes in very useful against the tougher ones. You can also improve your weapon, allowing you to deal more damage with a correct answer. Once you die though, that’s it. You have to start from the beginning, although you do retain the knowledge you’ve learned thus far. Your progress is also saved during the game, so if you have to leave it for some reason you can start right back where you were. Providing, of course, you can remember all the stuff you’ve been taught.

Dungenious is a fun game that is really designed to be pick-up-and-play. You can get through games fairly quickly, possibly learning new stuff along the way. The only real issue is that it’s very easy to forget everything you’ve learned between sessions, so when you come back to it you’ll be struggling to remember who invented powered flight (the Wright Brothers) or what the binary value for 13 is (01101). Apart from that it’s a fun little dungeon crawler, with tactics, skills and really tense moments. Now if you’ll excuse me, I need to go read up on film directors.