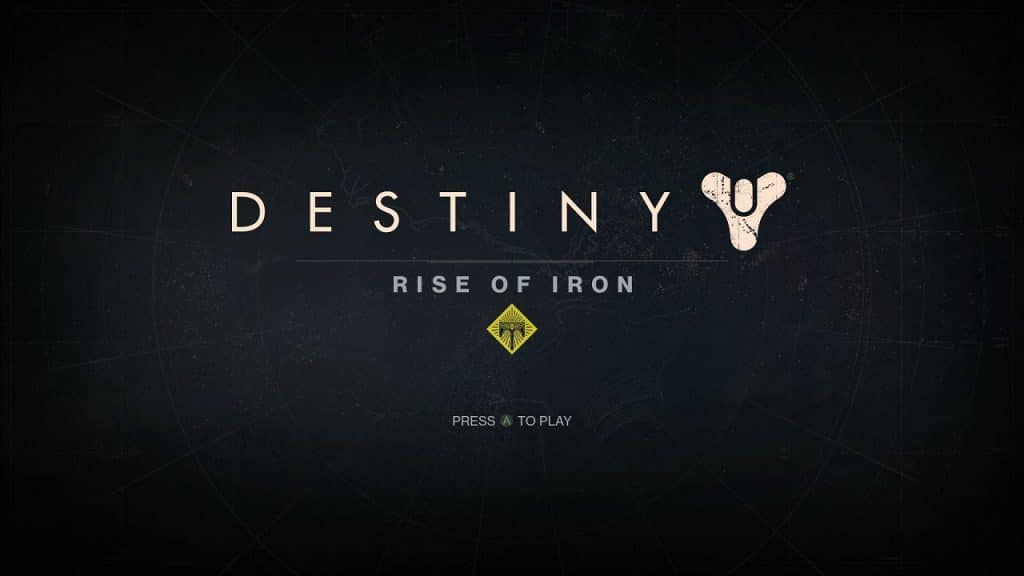 Spare a thought for those who develop and publish online multiplayer games. A single-player only game is a relatively simple affair – you develop the game, you publish it, people buy it, you do the occasional expansion or DLC but really that’s it and you move on to the next one. For online multiplayer games there’s a lot more pressure to keep people interested and playing for a long time after release. One such game that I want to talk about today is Destiny, now into its third year. The latest expansion, Rise of Iron, has just been released and the hope is that it will reinvigorate the game.

I’ve been playing Destiny on and off for about a year. I have a mere fifteen – twenty hours playtime logged. I enjoyed the game but every so often I let it slide for one reason or another. Maybe I’m up to a mission I don’t feel confident with, maybe I find something else to do or maybe I just decide to take a break. Either way it usually takes some new content – either a special event (such as the Crimson Days event) or an expansion (for example Taken King or the new Rise of Iron) – to get me back on board.

My journey – or, if you prefer, legend – in Destiny began fairly unspectacularly. I had trouble doing the first few missions and found myself getting more and more stressed. I stuck with it, though and after that initial learning curve I found a brilliantly realised future world. Last time I wrote about Destiny – more or less a year ago – I said how much I liked the general aesthetic of a future where humanity was on the ropes and its greatest hope was warriors like those of legend. Knights, wizards and rogues in armour and flowing cloaks streaking across the landscape to meet an implacable foe with the fate of mankind in the balance.

But then I was put off by the gear system where the highest level equipment would only drop for strikes or raids, none of which I was at the appropriate level for. And so my hero languished, seemingly fated to wander the patrol zones just shooting the same enemies over and over again. The Taken King expansion helped somewhat as new gear suddenly became available but to be honest it felt like too little too late. I would have to grind up to the big time the hard way.

Now I do have to make mention of the assistance I received from my fellow, more experienced, FBF colleagues. They helped me get through the main storyline missions – some of which have been recorded for posterity and are available on our YouTube channel – and as a result I was able to get better gear. But yet again I found myself drifting away from the game. Promises of “we should get back to that” and a relatively successful round of Crucible battles for the Crimson Days event didn’t really do much to draw me back.

But with the release of Rise of Iron Destiny has taken on a brand new lease of life – a rebirth if you will. I recently took on some of the Taken King missions, albeit a year late, and I finally managed to reach level 40. And it’s as though Destiny has become a completely different game! I can finally use the equipment I’d picked up that was too high a level at the time. I can finally get to grips with the various Light scores and improving my gear. The infusion system is my new favourite thing about the game as it allows me to get new and better armour without sacrificing the look I’ve carefully arranged. And now I feel ready to take on the brand new content without undue delay.

A lot of this is down to the developers. As you may imagine when new content is released the developers want as many people to experience it as possible. And that isn’t just limited to those who are already at the appropriate level, it also includes those who are running to catch up – like me. To that end they give players better equipment at the beginning, along with items that can help the players level up quickly. It certainly made a difference to me. I haven’t seen much of the new stuff yet but what I have seen gives me confidence that the best times are still to come.

I don’t know how long this current resurgence will last – maybe for a long time, maybe not so long – but I for one am glad that developers continue to invest in their games like this, improving what does work and fixing what doesn’t, as it gives us something to go back to that’s new while still familiar. I have heard that this is the final expansion for Destiny, presumably there will be a Destiny 2. In which case it’s a great way to finish a great experience. It has been said that Bungie’s approach to gaming is to take thirty seconds of fun and repeat that over and over again. In this case I think they have succeeded admirably. I’m sure that no matter how many times I leave the game I will always come back to it eventually. And that is definitely an accomplishment in my book.