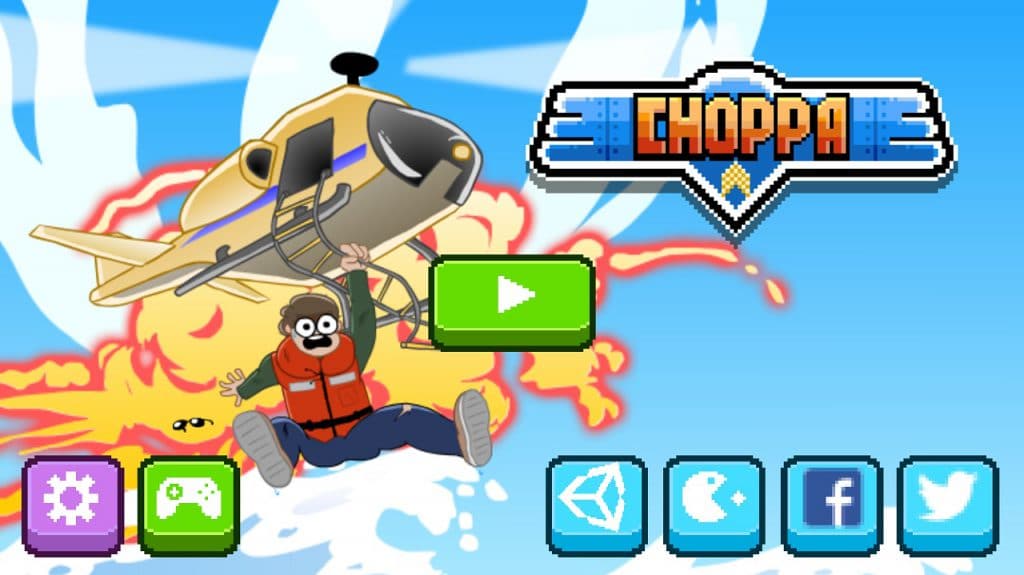 First of all, let me say that I have not played Choplifter. I never owned a Sega Master System – or any other console or device it was available on – and I never owned the game. So I don’t have the nostalgia connection that other people would have. I didn’t have the singular pleasure of piloting a helicopter through burning debris, trying to rescue helpless victims. So when I was given Choppa to preview (as it is still currently in beta) I was a bit reluctant to do so. I did accept it, however, and had a go at it.

My first impression of Choppa– after looking at screenshots and trailers – was that it greatly resembled Flappy Bird. Reading about the game, seeing mentions of procedurally generated stages and obstacles, didn’t help this impression. Now I don’t actually like Flappy Bird games. The randomness of the obstacles and the constant tapping of the screen doesn’t appeal to me, and I couldn’t see how Choppa would be any different.

As it turned out, Choppa is a very different game to Flappy Bird. The controls are very straightforward – touch and hold to make your helicopter fly in a specific direction, hold two fingers to the top or bottom corners to make the helicopter ascend or descend. Picking up passengers and crates is done by simply flying near them, and similarly dropping them off is done by flying near the rescue raft. So no tapping then.

As you complete stages you earn coins, which you can use to upgrade your helicopter – for example buy a longer ladder – or even to purchase new helicopters. The background music is advertised as being reminiscent of 80s games and it is a loud, brash soundtrack. The characters and vehicles are cute and cartoon-like and can get into some amusing positions – for example when I accidentally knocked a would-be rescuee of his platform into the ocean he started jumping and bobbing. I managed to fly low enough toe pick him up, but he ended up hanging off the ladder by his feet! I shudder to think how dizzy he would have gotten bouncing around down there while I was trying to get him to safety!

There are, however, some things I don’t quite like about it. First and foremost is the level structure. As I said, the stages are procedurally generated so you can end up with some difficult – if not downright impossible – combinations. Girders with narrow openings, bird nests with birds that fly up at you, flame throwers, fans with giant blades, massive cranes, a solid hit on anyone of these causes you to explode and sometimes the openings between them are so precise it can lead to a bit of hair pulling.

This leads on to the other thing I don’t like. If you do blow up you can’t just start the level again. You are given the option to earn a retry by watching a 30 second advert. Given that sometimes you can crash within a few seconds of starting a level, this means that most of your time in the game will probably be spent watching yet another advert for Mobile Strike or some Candy Crush or Slots game. The only other option is to restart from the first stage. Oh and by the way, each time you start the game you begin at stage one. Your coin score is kept – thankfully – but it can be a bit frustrating having to go all the way back to the beginning, especially if your in an area with no signal so you can’t watch any adverts to earn another go.

Interestingly, if/when you do retry a stage, it’s kept in the state it was in when you died. If any obstacles or objects have been moved or destroyed they stay destroyed. Also, the blackened husk of your previous attempt stays at the place where it met its demise, forming another obstacle. If you, like me, have a habit of dying on particularly narrow gaps it just makes things that much harder. On one level I crashed and blew up quiet a few times before I decided to quit.

There are some other features of note, for example a video replay feature where you can rewatch particularly impressive displays of piloting skill or epic lacks of same. These can then be uploaded to Youtube so that the whole world can laugh at your incompetence.

I can see that there are people who will enjoy this game, especially those with fond memories of the older Choplifter, but as it currently stands I’m not really getting into it. The continual bombardment of advertisement videos in order to retry, and the general feeling that I’m not really making any progress if all that will happen is I start again, kind of put me off. Maybe by the time the game is actually released I’ll be ready to give it another look.