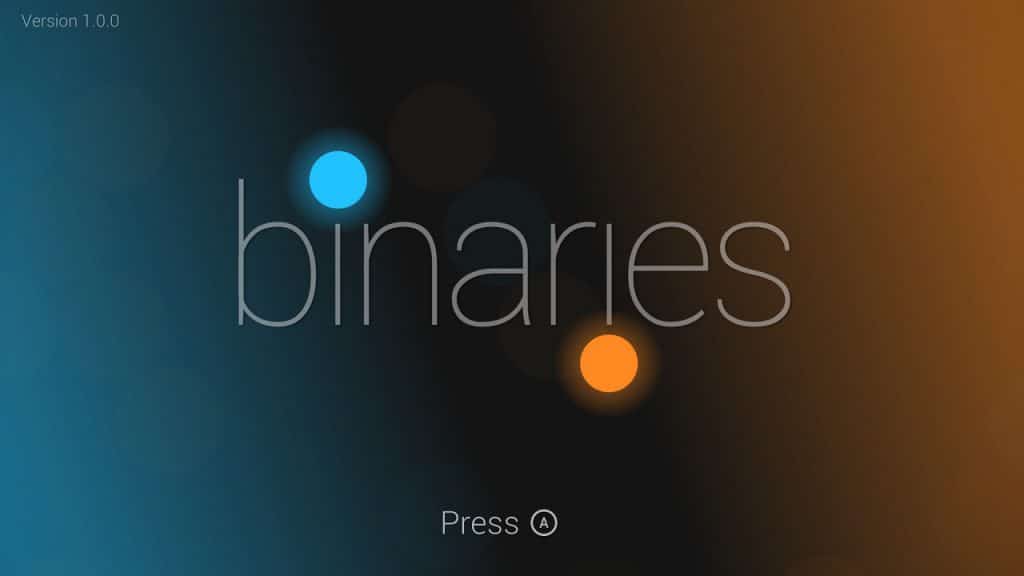 Binaries is a puzzle platformer game developed and published by Ant Workshop Ltd. It is described on the Steam store page as “the world’s first concentration platformer”. I’m not entirely sure what it means by that but it definitely requires concentration, precision and a keen sense of timing. So obviously I was doomed from the start.

In Binaries you control two coloured balls – a blue ball and an orange ball. The object of each level is to guide each ball to its respective goal within a time limit. However, you control both balls simultaneously. Whatever direction you move one ball in, the other ball will move in the same direction. Whenever you jump with one of them, the other will also jump. Added to this are hazards to overcome – mostly spikes but there are also moving walls and mines. And if that wasn’t enough the spikes can be placed at different points along the balls’ paths!

The game starts off gently enough, with the first couple of levels introducing you to the controls and the idea that both balls move at the same time. The paths for each ball are identical. Then it shows how each path can be different, so you learn how to manipulate the balls so they can get where they need to go. Then it introduces the spikes, and things suddenly get more serious. One touch of a spike is enough to pop one of the balls, at which point you have to start the level over again.

From there the difficulty curve just keeps rising. One level had the blue ball in a central chamber while the orange ball was in a ring around it. Spikes were liberally dotted around so I had to jump the orange ball up and over while keeping an eye on the blue ball, making sure I didn’t jump too far and pop it on a spike. At the same time jumping too short caused the orange ball to land on spikes. The game does give a few tongue-in-cheek hints, at one point telling you about an important lesson to be learned. In this case the important lesson was that the blue ball could safely move across orange spikes and vice versa, a mechanic that came in very useful later on.

As I said, each level is timed. There is an initial goal to beat, which on its own earns you a “B” rank. If you do it faster you can get an “A” rank or, for the really speedy players, an “S” rank. As you may expect, the first attempts will be taken slowly as you learn where the balls can and can’t go. Once you learn the pattern you can re-attempt the level and try to get a higher rank. Mercifully, the timer resets on each death, so there’s no real penalty for failing over and over again other than the rage you will feel.

Not only is there no penalty, a lot of the Steam achievements are for dying over and over again. There are achievements for dying 50 times, 250 times, even 1,500 times and possibly more! The level select screen even has statistics like your current death count, deaths per minute, even a total count of all player deaths! Clearly the developers knew what they were doing with this game – I thought I was going to get the first achievement on the first spike level! The level of precision and timing required to ensure that first one ball, then the other ball avoids spikes is really high, and if you take your eye off it for a split second you have to start again, and again, and again.

The level select screen is an interesting feature as well. After the first couple of levels you have a choice of which level to tackle next. Of course, in order to complete the game you need to successfully navigate all of the levels, but it does allow you to try something a bit different if you find yourself smacking your head against your desk.

The graphics are simple but very effective. The colour palette is limited to various shades of blue and orange but it is quite soothing. It kind of reminds me of Thomas Was Alone, although with more bouncing and more spiky death. The music is jaunty and uplifting, as if it’s trying to encourage you to keep going. The style of the game is almost playful – it knows it’s hard and it’s poking fun at itself.

This playfulness also extends to the text that appears in each level. From giving you hints in some places to lampshading its own difficulty, it brings out one or two wry grins. One level asked me if I preferred #TeamOrange, #TeamBlue or #TeamDon’tCareThey’reBothTheSame. The text uncovers gradually as you progress through the level, which again gives you some impetus to succeed.

Binaries is one of the more unusual types of games. It can get very frustrating, and it knows it, but at the same time it seems happy and playful, like an annoying little sibling who knows you love them but who really gets on your nerves. Once you get through a particularly difficult level you feel like punching the air in victory, only to die horribly again on the next. The idea that you get achievements for continually failing is funny, as are the various death statistics that the game takes pleasure in rubbing in your face. I enjoyed it – there was something about the required pixel-perfect positioning that made me want to keep going. It’s definitely worth a look if you want to try something different.

Next: Talisman: The Horus Heresy – I was there