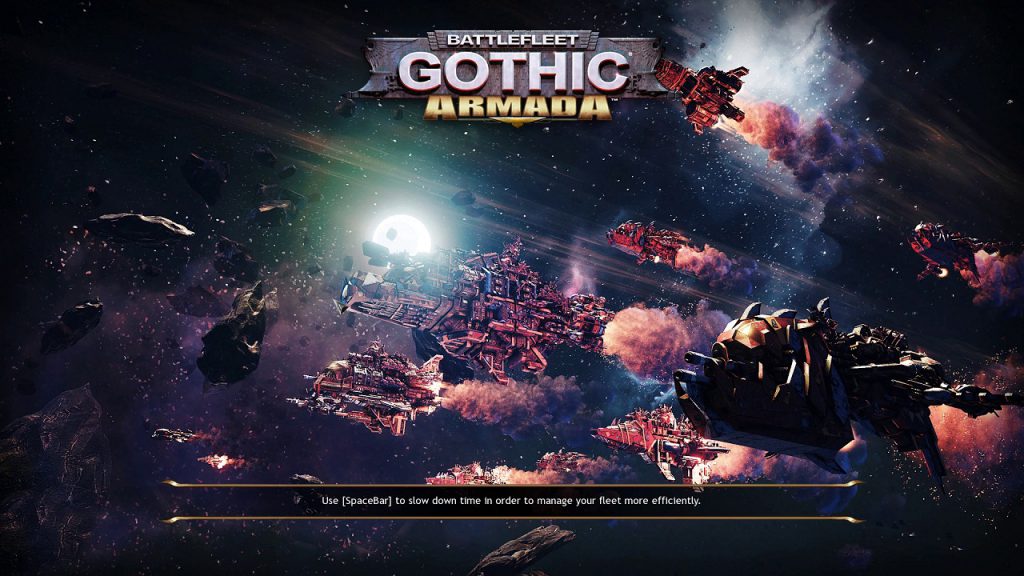 Well, it’s been a long wait, but the time is now upon us. The time when Abaddon the Despoiler will unleash his forces and strike forth from the Eye of Terror. The time when worlds both civilised and uncivilised alike will quail under the might of the twelfth Black Crusade. Or, to put it another way, the time when Battlefleet Gothic: Armada is fully released. Has it been worth the wait? That’s what we’re here to find out.

The beta version of Battlefleet Gothic: Armada has been available for a while now, and players have been eagerly getting down to the business of directing huge mile-long starships across the blackness of space, blowing each other apart. Whether it’s the hardy Imperium, the insidious Chaos, the brutish Orks or the sneaky Eldar, there is a lot here to suit every style. Over the past few weeks each fleet was introduced and players devised new tactics.

The beta version also gave us a taste of the single player campaign, introducing us to the basics of ship to ship combat, repairing and upgrading ships, and the strategic map. There were only three missions available, making up the tutorial section of the campaign, but it had enough to let us know the sort of thing we would be in for. From the humble beginnings of a single light cruiser investigating an abandoned space station to defending cargo transports wtih a fleet of ships, we were introduced to Admiral Spire and told of the part he would play.

The single player campaign is now fully available, and it looks to be a great experience. A strategic map of the sector shows the systems that are allied to the Imperium. Over the course of a game turn some of these systems will be attacked or vital missions will become available. As fleet commander you will have to choose where to deploy your ships, but you only have a limited number of opportunities to do so. Accordingly as the game progresses you have to decide which systems to defend and which to allow to fall to the predations of Chaos or the Orks.

Once you’ve made your decision on where to send your ships you are taken to the actual battle itself. The mission will have a points limit which you can spend to add ships to your fleet. After you deploy them in your deployment zone it’s time for combat. And it looks great. Ships move slow and ponderously, as befits their massive size. Cannon fire and energy lances cut through the void to inflict damage on enemy ships. You really get the sense that these are real titans clashing together. Different mission types have different objectives, so it’s not always about destroying the enemy fleet.

That said, there are some things that don’t sit quite right with me. For one, some of the dialogue doesn’t really fit. For example, the first mission involves destroying an orbital defence platform. Upon doing so, you will be told that you “blew it to pieces”. I can’t really imagine anyone in the 41st millennium saying that. Obliterating it, annihilating it, sure, but not blowing it to pieces. Also, some of the AI pathfinding leaves a bit to be desired, as sometimes ships will decide to do nothing while enemies surround them. These are minor gripes and can be worked around.

There’s also another odd behaviour when it comes to certain missions.  Usually missions require you to destroy or drive off the enemy – even if they all escape you get the victory screen.  Given that most of my battles so far have resulted in the enemy warping away from the battlefield this is a good thing.  However, some missions require you to hold the line and destroy enemy ships before they escape – you are given defense platforms that are supposed to prevent warp jumps and your job is to protect them from the opposing ships who quite understandably want to destroy them.  In these cases the enemy still warps away when they get heavily damaged, but here that counts as a success whereas by the letter of the objective it should be a failure.  Again it’s a minor point but it is a bit jarring.

That aside, Battlefleet Gothic: Armada looks and sounds fantastic – the ships are exact replicas of the ships from the table top game, the weapon fire looks and sounds as you would expect it to sound. The warp jump sequences are a bit underwhelming though – usually descriptions of a ship jumping to warp are much more vivid in the use of coruscating light and colour. Again, apart from that you really do feel like you are in control of these massive behemoths and that the fate of the galaxy does rest in your hands.

The multiplayer side allows you to build up your own fleet in your chosen faction and take on other players. There’s a matchmaking system in place to make sure you are fairly evenly matched with people of the same level, although you may still fall foul of upgrades and abilities they’ve put on their ships. It’s still great fun though, and losing a battle doesn’t mean you’ve lost your ships. Most of the time they can be repaired and upgraded and sent into battle again with a new loadout, so defeat becomes a learning experience.

If you’re a fan of Warhammer 40,000 you will most likely be very pleased with this game. If you like space-based RTS games with massive ships you will also more than likely enjoy this game. I’ve been looking forward to it ever since it was announced and I’m very happy to finally be able to play it. Now, if you’ll excuse me, I have a galaxy to liberate from the vile grip of Chaos. For the Emperor!