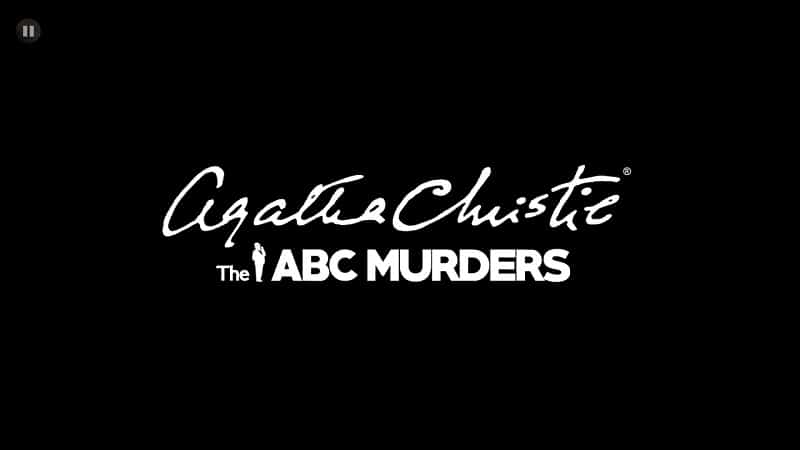 Once again you can blame Dann for the title.

Anyway, I really like Poirot. Hercule Poirot, possibly Agatha Christie’s most well-loved character and greatest creation, waddles his way from one case to the next, only taking on the most fiendish and perplexing mysteries to tax his “little grey cells”. There are already a number of Poirot games available, most of which I’ve played – Murder on the Orient Express, Evil Under The Sun, the (ahem) Hidden Object game Death on the Nile, and even an earlier adaptation of the ABC Murders on the DS.

One of the main problems with adapting a well-known novel is that we know how the story ends. Don’t worry if you don’t know as I’m not going to spoil it. Just go read the book, watch one of the movies or even play the game. This means that the challenge for developers is to find some way to make it fresh. This can include fleshing out the story and characters, in some cases changing the endings (looking at you And Then There Were None!), or adding a load of puzzles. If done well it works well. If done badly it’s not pretty.

For those unfamiliar with the plot, the ABC Murders sets the great Belgian detective against a serial killer who sends Poirot letters with clues to his next crimes, challenging Poirot to stop him. As the body count grows, so does the list of suspects and the mystery continues to deepen. The game follows the plot pretty closely which, for a purist like me, is generally a good thing. What I’m more interested in is how the game actually plays.

It’s a point and click game (I seem to be doing a lot of those lately! Not complaining though) where you guide Poirot through the investigation. Unlike most games of this kind there is less emphasis on trying to figure out who to talk to next or which item to use on which object. Instead the game tells you who to talk to and where to go as a series of objectives. The emphasis is on thinking like Poirot when talking to suspects and mimicking his train of thought to solve the various puzzles that come up.

We’ll look at talking to suspects first. Poirot meets many people from all parts of society, from drunken husbands to world travellers, and antique collectors. Before he engages them in conversation Poirot has the opportunity to observe them and pick up clues about their personality and mood. Then he begins his questioning. There are several options to choose from and, while they all lead to the same place, you choose based on how you think Poirot would actually react. There is no consequence for choosing the “wrong” option though.

The puzzles are of mixed quality. Most of the time the objective is to open a box or a lock to find new clues. If I’m honest, this is where the game starts to fall down a bit. For the most part the puzzles make sense and you can figure out what your supposed to do. There are a few, however, where I had no idea what was going on. Fortunately the game doesn’t leave you in the lurch as there’s a hint system which automatically takes you through the first/next step with the idea that you can then carry on once given that little push. However, you can keep pushing that button and just have the puzzle solve itself, which kind of ruins things a bit. It can turn into a crutch and given that some parts seem to be completely unresponsive, giving no hint of where you need to click as to interact with the puzzle, you may find yourself going back to that button more than you would like.

Apart from that though there is a lot in this game to enjoy. The art and animation style is cell shaded and looks really good. The various characters are well realised and, with one exception, well voiced. That one exception is Poirot himself. The actor tries to do a French/Belgian accent but there are some pronunciations that grated on me. He would mispronounce some words, say other words in a strange way (for example “signature” was pronounced “signatter”), and in one instance he pronounced “Z” the American way – “Zee” instead of “Zed” as a European would. It wasn’t a disastrous performance by any means but it could have been a lot better.

All in all it’s a good interpretation of the story, and it looks great as well. Some of the elements – reconstructing the murders or connecting thoughts and evidence to answer important questions – work well while others – namely some of the puzzles – can make things more frustrating than they have to be. I enjoyed it though, and I enjoyed the few parts where you could go in a different direction to the story or cause a different outcome. It’s well worth a look, especially if you’re a Poirot fan, but don’t set your expectations too high.